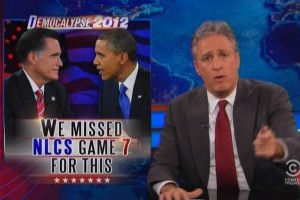 On Tuesday night, Jon Stewart took a closer look at the third and final presidential debate, which focused on foreign policy. Chronicling how much Mitt Romney agreed with President Barack Obama, Stewart noted that while we’ve still got a choice of color, they’re both the same model.

But to begin with, the pre-debate comments about the president’s foreign policy. So many of his critics charged that he’s had the weakest foreign policy of any president. Given that record, Stewart said, the debate should be a “bloodbath.”

And yet, there was so much agreement. “I think Romney’s leaning Obama,” Stewart observed. He’s “one of this year’s coveted swing voters.” Playing a second montage, Stewart asked, “What the hell was that?” We still get out choice of color, he said, “but it’s the same model!”

Stewart then pointed to some contradictions on Romney’s part. First the agreement about 2014 withdrawal from Afghanistan, and then Iran. In the past, Stewart recalled, Romney’s not been shy in stating the military options are not just on the table, but in our hand. But in the debate, he spoke of “peaceful and diplomatic means.” Stewart concluded: “Romney appears to have made the calculated decision that his bellicose and hawkish performances in the Republican primaries would be less appreciated by the normals.”

He then summed up Romney’s leadership message: “Follow me! I’ll be right behind the president.”

But, don’t worry. All the media bubble seems to have agreed: This whole debate didn’t even matter.