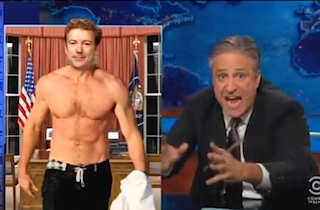 Rand Paul’s presidential ambitions were the subject of Jon Stewart’s second segment of the night Thursday, after the Kentucky senator embarked on a 10-stop tour of Iowa. But is Paul up for the rigors of the Republican presidential primary?

As Paul showed this week, he’s already backing away from his promises to end all foreign aid, including to Israel, by saying he never “targeted” that country specifically. “Israel was collateral damage,” Stewart explained, “in Rand Paul’s indiscriminate targeting of foreign aid in general.”

“Senator, all this fumbling around doesn’t make you look good,” Stewart said. “You took a position, you should stand by it. Stick the landing to show us you have integrity. Say something, anything to persuade us that you are, like your pop, presidential material.”

From there, Stewart let Paul lay out, in his own words, what he think the press should be allowed to say about him. “You want to write an article that I’ve spent the last four years trying to put conditions on aid to people who hate us and burn our flag, then it would be an accurate story,” Paul said to the media. “You can put as a sideline that I’ve always talked that every country ultimately would be better off to be independent.”

“Boom! ‘And you could illustrate that article with a photo of my head on Hugh Jackman’s body standing in the Oval Office,'” Stewart said. “Congratulations, Mr. Next President, you’ve done it.”