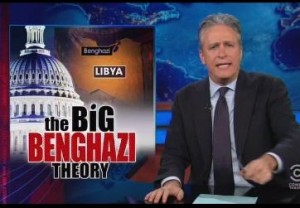 Jon Stewart tonight took on today’s big Congressional hearing on Benghazi, and specifically on how it’s become the latest way Fox News has gone all-out in covering a potential Obama administration scandal while wondering where the rest of the media is. But Stewart pointed out that no one else is quite on board because everyone’s basing their outrage on speculation, and, frankly, “the denizens of Bullshit Mountain have cried wolf before.”

Stewart pointed out how Fox News has repeatedly highlighted how each different testimony in the past few months would be the big game-changer on Benghazi, and this one would be no different. He pointed out that there was already an accountability report released, and that the GOP seems to be more outraged about this attack than any attack on Americans abroad during the Bush administration.

Stewart also reminded viewers that pretty much every potential Obama administration scandal has been described as worse than Watergate, with one Republican congressman saying Benghazi is worse than Watergate plus Iran Contra times ten. But Stewart had to point out that the reason no one else is as outraged as Fox is that while they’re “at DefCon ‘this definitely happened,'” no one actually knows what happened, and so everyone’s just speculating. Stewart mocked all the speculation, saying “if dingleberries were diamonds, I could open a Kay Jewelers in my pants.”

Stewart said that Fox News has a “history of hysteria,” and they may be proven right when more facts come out, “but the denizens of Bullshit Mountain have cried wolf before.”