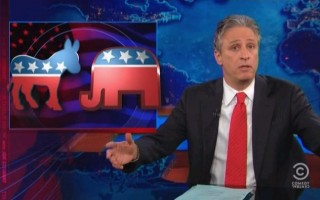 In a segment titled “Cockblock the Vote” Thursday night on The Daily Show, Jon Stewart tore into Republican-backed voter identification laws in Pennsylvania and Ohio, which he branded as two different attempts at “suppressing Democratic turnout.”

“Voter fraud is an enormous issue with more than exactly 10 documented cases of it in the entire country alone,” Stewart deadpanned, “just since the beginning of the millennium. That’s .000000284% of all votes. So you can see why Pennsylvania would want to enact a voter ID law that one study claims could potentially disenfranchise around 9% of the entire Pennsylvanian electorate. But that’s the price you pay to prevent something that doesn’t happen.”

“Pennsylvania has voted Democratic in the last five presidential elections,” Stewart pointed out, “leaning toward Obama in this election. It’s not like voter ID law is blatantly designed to skew that result. Right, State House Republican majority leader that designed it?”

He then played tape of that Pennsylvania legislator, Mike Turzai, saying, “Voter ID, which is going to allow Governor Romney to win the state of Pennsylvania. Done.”

Stewart then went after Ohio Republicans’ attempt to restrict early voting hours on Democratic counties but extending early voting hours in Republican ones. “Are you kidding me?” he exclaimed. “All Americans who want equal access to the vote take two-steps forward. Not so fast people who live on Martin Luther King Boulevard South.”

Stewart then played a clip of an Ohio Republican legislator defending the rules by saying, “We try to make it easy but we can’t, you know. I say we’re not 7-11. We can’t stay open 24/7 and let anybody vote by any rule that they want to.”

“Two states, two completely different means of suppressing Democratic turnout,” he concluded. “Here is the one thing they have in common: the mechanism of the vote are in the hands of partisan elected officials.”