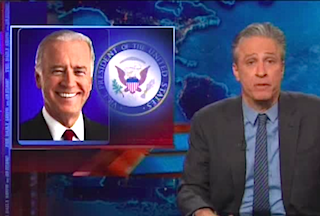 Former President Bill Clinton was the guest on Thursday night’s Daily Show, so Jon Stewart decided to do his wife Hillary Clinton a favor and spend the opening segment demonstrating why Vice President Joe Biden “will never be president.”

“As Joe Biden giveth, Joe Biden taketh away,” Stewart said, before playing a clips of the vice president’s latest verbal gaffe, including his inopportune use of the term “Shylocks.”

“A single isolated instance of using outdated racial terminology hardly disqualifies…” Stewart began, before rolling the tape of Biden recalling his meeting with “the wisest man in the Orient.”

For me, Stewart called on Senior Casual Racism Correspondent Michael Che, who delivered his final segment for The Daily Show before decamping to anchor Weekend Update on Saturday Night Live.

As he did with John Oliver last year before he left the show for HBO, Stewart surprised Che by calling of the planned bit to instead give him an emotional farewell, even though he’s only been on the show for three months.

A parade of correspondents appeared to pay tribute to Che, who many of them may or may not have even met yet. “Don’t be a stranger, Wyatt,” Jason Jones said. Stewart then sat down at a piano with Che and sang “I Will Remember You” and Che’s handful of clips played on a giant screen behind them.