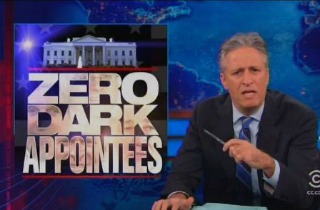 Jon Stewart took on the controversy surrounding President Obama‘s recent cabinet nominations in a segment he dubbed “Zero Dark Appointees,” and noted that the outrage might be somewhat misplaced because Obama is “somewhat diverse himself.”

Stewart examined why Obama may not have nominated Susan Rice for Secretary of State, which would have easily diversified his cabinet: “Lady and minority, triple word score!”

But is there any other evidence that Obama is discriminatory in his hiring practices, Stewart asked? He then aired the New York Times photo in which it was claimed Obama was standing with only white men and proceeded to point out a black man. He also noted Obama himself was another black man in the picture: “And there is another black guy who appears to be running the meeting.”

What’s the president’s take? “I would suggest everybody kind of wait until they’ve seen all my appointments.”

Stewart’s correspondent Jessica Williams noted that Obama is also “half-white.” White Obama, apparently, has just been “biding his time, just waiting to take this country back and restore the traditional America that Black Obama has worked so hard to destroy.”

“White Obama is going to return this country to the greatness of the founders…with a cabinet of white men, prayer in schools and vaginas that can repel rape sperm,” she said. “It’s going to be great.”

Watch the clip below, via Comedy Central: