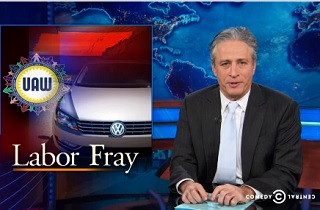 On Friday, workers at a Chattanooga, TN, Volkswagon plant narrowly defeated a plan to unionize the site, and while the vote was big news on Monday morning, news reports on the vote downplayed or ignored the role of Senator Bob Corker (R-TN) and other Republicans in the vote, and reported it as a blow to the United Auto Workers. On Wednesday night’s The Daily Show, however, host Jon Stewart took aim at Corker, and other Republicans, for ignoring the free market when it suits them.

As Stewart explained, the Tennessee union vote was the subject of intense pressure, both from within the state and without, and even included a threat from Corker that Volkswagon had to publicly refute:

Frank Fischer, chief executive and chairman of Volkswagen Chattanooga, rushed to respond after Mr. Corker said VW officials had told him they would expand the plant if the U.A.W. was defeated. Some legal experts said that if Volkswagen officials made such a statement, it might be construed as an illegal intimidation or inducement to pressure the workers to vote against the union.

In a statement, Mr. Fischer said, “There is no connection between our Chattanooga employees’ decision about whether to be represented by a union and the decision about where to build a new product for the U.S. market.”

In what has become a Daily Show staple, Stewart played clip after clip of Republicans passionatey explaining that the government should not interfere with businesses and the free market, including one Bob Corker.

Here’s the clip, via Comedy Central: