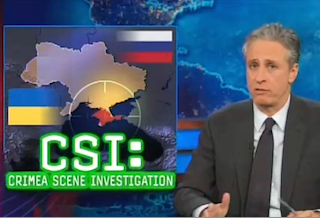 Jon Stewart opened Tuesday night’s Daily Show by trying to answer an important question that has been vexing cable news: Is Crimea lost? “Where is Crimea?” he asked. It’s all gone! It’s gone. Crimea. Oh, Crimea, we hardly knew ye.”

But if Americans know nothing about Crimea then why do we care so much that it’s gone? “We care about Crimea and the Crimeans because Russia taking it over makes us look weak,” Stewart explained. “As you know we have a foreign policy that is focused primarily on comparative penis size. If Putin is going to walk in there and add Crimea to the tip of Russia’s dick, look out Moldova, we’re coming for you.”

For more analysis, Stewart turned to CNN’s body language expert, who revealed that Vladimir Putin is playing it close to the vest. And our Pentagon intelligence officials aren’t much better at figuring out what the Russian leader is up to. Doing his own research, Stewart concluded that Putin is “the body language equivalent of tweeting in all caps and the message is ‘I’m a nut bird.'”

Harkening back to Jason Jones’ recent trip to Moscow, Stewart concluded that after Putin’s “Ukrainian puppet regime was overthrown, he lost control of a neighboring nation.” And now “he doesn’t want to look like a pussy.”