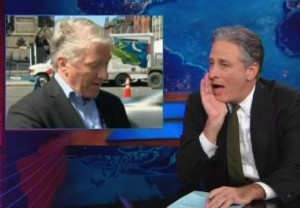 Jon Stewart let CNN have it over its erroneous reporting that an arrest had been made in the case of the Boston Marathon bombing. Stewart mocked how much CNN kept boasting of its “exclusive reporting,” which turned ot to be exclusive “because it was completely fucking wrong,” and was even more blown away by how CNN was subsequently backing away from and questioning that very report. Stewart described this as the network “shit[ting] in their own mouths,” christening CNN “the Human Centipede of News.”

Stewart played a variety of clips in which Wolf Blitzer touted the network’s “exclusive reporting” on the arrest. Stewart said, “It’s exclusive because it was completely fucking wrong!” He also got in a veiled swipe at new CNN head Jeff Zucker for claiming Stewart to be a jealous competitor.

Stewart asked, “Did any of your sources end their tip-offs to you with the phrase ‘Ba ba booey?'” And when CNN just dropped the story altogether, Stewart called it a “news story as imagined by M. Night Shyamalan.”

But perhaps the best part for Stewart was the hour-long gap between the initial breaking news and the eventual confirmed walk-back in which CNN anchors attempted to clarify and walk back the report of the arrest. Stewart viewed this as CNN removing the middle-man and realizing they can “shit in their own mouths.” Or, as Stewart more colorfully put it, “the Human Centipede of news.”

Stewart then brought on correspondent John Oliver who, with the help of Jessica Williams, narrowed the identity of the bombing suspect down to either a “dark-skinned male, possible white, or maybe a woman,” “a fat Hispanic baby,” or “a dog on its hind legs wearing glasses and a hat.”