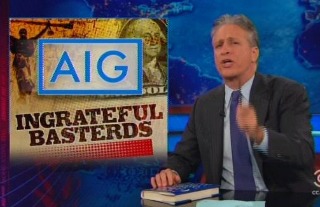 In a new segment dubbed “Disgraced Financial Institution Update”, late night host Jon Stewart took on the recent controversy surrounding mega-financial services group AIG. He also took some time to bash HSBC, adding an update of the bank and bestowing upon it the new nickname of “Holy Shit, Bank Corrupt.”

Stewart updated viewers on the accusations against HSBC for doing business with firms linked to terrorism and funding Mexican drug cartels. “It’s not like they were working with and counseling enemies on how to circumvent the entire security apparatus,” Stewart reasoned. But, wait, they actually were: a news clip described how HSBC was caught teaching foreign criminals to “format messages so transactions would not be blocked by the United States.” Of course, Stewart added, no one from the company will face prosecution.

He later blasted AIG for considering suing the government for bailout terms which they considered unfair. “Did you get that?” Stewart asked. The group is mad because the government stepped in and assessed their “pre-existing condition” as “the money is all gone-orrhea” so they planned to sue.

“The only thing AIG is guilty of is consistency,” he added. “Well, that and a series of catastrophic investments that brought the world to the brink of armageddon… but that was pretty consistent.”