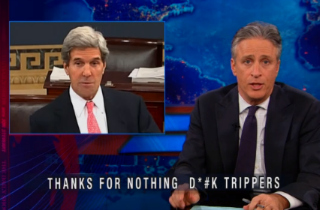 During last night’s Daily Show, Jon Stewart tore into Congress for having difficulties passing the latest Hurricane Sandy relief bill, accusing them of tripping over their own genitals in the process.

“We have a very simple rule in this country: when one region gets hit by a natural disaster, everybody pitches in,” Stewart began. “The federal government steps in also with an enormous amount of aid dollars. But after Hurricane Sandy, some congressman thought it was time for the rules to change.”

Stewart singled out Rep. Mick Mulvaney (R-SC), who appeared on cable news decrying the expensive “pork barrel” spending that was included in the aid package. “Your state had no problem accepting non-offset federal aid after hurricanes Hugo and Gaston,” Stewart said.

He then rolled out a series of soundbites from northeastern Republicans slamming their colleagues for selectively changing the rules around Sandy. New Jersey Gov. Chris Christie took the cake by telling his fellow Republicans that if they are going to change the rules around his state, then “they picked the wrong state to mess with.”

Stewart was so moved, he was brought to faux-tears. He even dedicated a new segment title for this momentous occasion: “Thank You For Not Tripping Over Your Own Dick.”

Of course, all of that was ruined… by a Senate Democrat, John Kerry, who insisted that this relief bill will not pass without that much-vilified pork spending for damaged fisheries in Alaska.

“Thanks for nothing, dick trippers,” Stewart concluded.