Stewart Trashes GOP On Gay Marriage-Bestality Link: ‘What Is It With You People And The Animal-F*cking?’
video

Stewart Trashes GOP On Gay Marriage-Bestality Link: ‘What Is It With You People And The Animal-F*cking?’

Stewart Trashes GOP On Gay/Bestality Link: 'What Is It With You And The Animal-F*cking?' 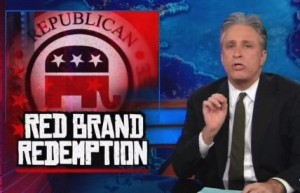 Jon Stewart tonight took on the GOP’s rebranding efforts, especially with minority outreach. Stewart mocked the short amount of time it took for someone in the Republican party to throw a wrench in those efforts, and found it just a little disturbing how popular the slippery-slope “gay marriage will lead to bestiality” line is on the right. Stewart asked, “What is it with you people and the animal-fucking?”

Stewart reminded viewers that it was only weeks ago that the GOP was determined to do better with minority outreach, and now already a Republican congressman has used the word “wetbacks.” Stewart asked, “Are the Republicans under the impression that you can shoot the moon electorally, like somehow, if you alienate every Latino, you get all the votes?”

But what about gay outreach? Well, Dr. Ben Carson linking gay marriage to bestiality didn’t help. And after listening to Carson’s confusing explanation, complete with a fruit metaphor, Stewart had to butt in and explain that there’s a difference between fruit that’s in the same aisle at the grocery store and linking gay marriage to “pedophiles and horse fuckers.”

Stewart ran audio of a Republican member of Congress making the same link, leading him to ask “What is it with you people and the animal-fucking?” He found it odd that the argument appears to be that only laws against bestality are what stand in the way of people cozying up to horses and pigs and whatever else tickles their fancy.