Stop the Presses: Bill Kristol and Paul Krugman Just Agreed on Something
VIDEO

Stop the Presses: Bill Kristol and Paul Krugman Just Agreed on Something 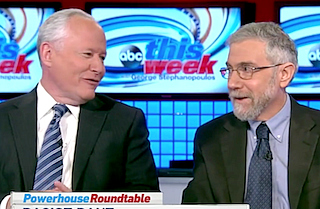 Weekly Standard editor Bill Kristol and New York Times columnist Paul Krugman have a history of battling one another on This Week with George Stephanopoulos, a rivalry that usually follows the comforting routine of Kristol spinning some issue through a cheshire grin and Krugman wearily interrupting with a look of wonk despair. It’s not a fair fight: one of these men is a Nobel Prize-winning economist and the other is colloquially known as the Wrongest Man in Politics.

But Sunday morning brought the pundit version of a lunar eclipse: the two actually agreed on something. Matthew Dowd had just finished arguing that the right’s embrace of Nevada rancher Cliven Bundy had backfired when Bundy’s racist remarks overshadowed his anti-gummiment message. Krugman scooped this fumble and ran it back to the end zone:

“We should talking about the message, not the man. Which is really a terrible message, which is that you have the right to use other people’s property, namely federal grazing land, for free. Freedom is the right not to pay for the damage you do. It’s really a horrifying thing that he was ever made a hero, even before these comments came out.”

Speaking of horrifying: “I’m horrified to agree with Paul Krugman,” Kristol replied, citing the Weekly Standard’s brutal editorial pleading with conservatives to back away from Bundy. “He’s breaking the law. He seems to be inciting people even to perhaps use violence against federal law enforcement officials. If you want to change the law, change the law. So on that we agree.”

Don’t worry, the two men went right back to disagreeing over economic inequality, as Kristol spun the issue through a cheshire grin and Krugman wearily interrupted with a look of a wonk despair.

NB: To simulate the experience of stopping the presses, turn your wi-fi on and off.