Stop the Presses, Everyone: Bundy Has an Opinion on Mexicans Too 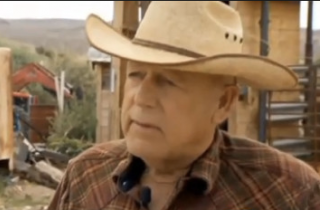 Someone please provide Cliven Bundy a list of topics to read from and let him just start pontificating, because I could listen to this guy croak out non-sequiturs all day. “Now let me talk about the Spanish people,” he says in this video below, out of nowhere, winding off into a tangent after his previously reported tangent on slavery.

“I understand that they come over here against our Constitution and cross our borders,” he says.

Haha, gotcha again! I know what’s coming next, race-baiting libs like myself are thinking at this point. Break out the pitchforks gang, we’ve got a live one here. He’s going to do a Bundy! Quick, everyone gather round the YouTube machine and let’s watch this old racist perform standards from the Racism’s Greatest Hits catalog — Wait, what? They should be in there. The pitchforks are in the closet. Next to the NPR tote bag and the deck of race cards. Fine, I’ll come look in a second, I gotta watch the rest of this video.

“And don’t tell me they don’t have better family structures than most of us white people.”

But, you know, Mexicans, aren’t they a little… you know… Mr. Bundy?

“When you see those Mexican families, they’re together,” he goes on. “They picnic together. They’re spending their time together,” he said. “I’ll tell you, in my way of thinking, they’re awful nice people. We need to have those people join us and be with us.”

Welp, there you have it. Let me apologize on behalf of the entire left-wing community for wrongly accusing Bundy of being racist. Because, as everyone knows, if you say one decent thing about one particular group of people that gets you off the hook for everything else.