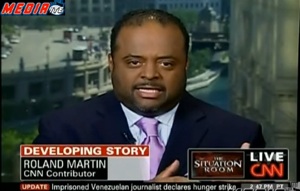 For those of you who may have unplugged from the Internet for the past few days, Michael Steele is not only back in the news, but his future role as RNC Chairman is a hot topic of debate. Last Thursday during a fundraiser in Connecticut, an amateur video camera picked up the embattled GOP heavyweight claiming that Afghanistan War was one of “Obama’s choosing,” which has lead to a number of cries for his political head. But last night Steele got some support from an unexpected source: the quasi-independent Roland Martin.

Martin is a well-regarded voice of political analysis from a left-of-center point-of-view. So his support of Steele’s comments regarding President Obama position and priority in the Afghanistan War is somewhat surprising, particularly in that it also echoes the rhetoric of Ron Paul (shown earlier in the clip below.) When challenged by Daily Beast contributor John Avlon that some of the criticism of Steele is “partisan politics,” Martin doubled down on his explanation and defense of Steele, making clear that its not the RNC chairman that is the issue at hand, but the viability of the Afghanistan War:

“Suzanne, it’s not playing politics. The reality is here and we have to accept it…and that is this is a hugely unpopular war. When Michael Steele made the point, that who has won a land war in Afghanistan in the last 1,000 years, we have a difficult role there. You have everybody in Washington, D.C. trying to figure out what does victory look like? How can we somehow spin this whole deal? It is not going well. Therefore, where is the plan to give Americans confidence that we can actually win, whatever win is? Michael Steele’s problem here is frankly he was too honest about that aspect and Republicans, they don’t want the RNC chairman saying that but I think Democrats and Republicans have to own up to what are we doing in Afghanistan. Is it working? And if not then what do we do?

Avlon pushed back saying that it was too early to evaluate the troop build-up and renewed commitment to the Afghanistan War made by Obama, and that calling in to question the overall mission – at this stage – undermines “support for the President or support for our troops in the middle of an escalation when we are trying to win this thing and defeat the Taliban.” Nonetheless, it would appear that two potentially big stories looming for the next week center around the viability of US Troops deployed in Afghanistan and Michael Steele’s once and future role as RNC chairman.