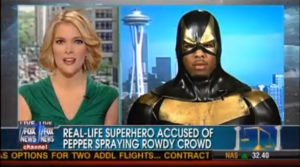 And now for something completely different: A Seattle-based civilian “superhero” ran into some trouble when he was arrested for unleashing a can of pepper spray into a rowdy crowd outside a nightclub. We’re not using the term superhero sarcastically here either. The man, who refers to himself as “Phoenix Jones,” dons a black and gold superhero suit as he goes out to fight and/or commit crimes, and pursues justice with the help of a sidekick, “The Ghost.” He was thanked for all his trouble, by the way, by being repeatedly hit over the head with a shoe by a woman who did not take kindly to someone showering her friends with pepper spray.

Fox News’ Megyn Kelly invited the masked crime-fighter onto her show for an edition of “Kelly’s Court.” And he seems like a really nice guy! (Like, really nice. Amirightladies?) Kelly, thankfully, asked the big question on everyone’s mind: “Why are you wearing that costume?”

It’s the costume that I wear when I go out and fight crime. It’s my super suit. It’s bulletproof, it’s stab resistant. I guess I found it’s pretty shoe resistant.

He further explained that something needs to be done to cull crime and that, instead of donning a ski mask and potentially being mistaken for a criminal himself, he decided to use “an image that meant something to me” — that of the iconic American superhero — to go out and make things right.

Kelly brought on her legal panel to weigh in on whether or not Jones should be charged with assault for his use of pepper spray and vigilante justice.

Fox News? Please give Phoenix Jones a show. Something like Space Ghost Coast to Coast with occasional cameos from Karl “Rovin’ Raider” Rove and Sarah “The Impalinator” Palin.

Do be sure to watch the segment, via Fox News: