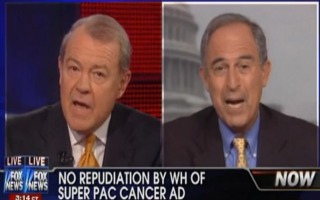 On Friday, former special counsel to President Bill Clinton, Lanny Davis, appeared on Fox News Channel with Stuart Varney for what was teased to be a segment in which Davis would call upon President Barack Obama to denounce the “cancer ad” that links Mitt Romney to a former steelworker’s wife’s death. The interview quickly became tense, however, when Davis tried to make the point that there were aspersions equivalent to those in the “cancer ad” in spots run by PACs supporting Mitt Romney.

Varney asked Davis what he thought crossed the line in the ad in question that requires President Obama to denounce it.

“The same thing that crossed the line when Mitt Romney used as an ad Barack Obama saying that he didn’t understand the economy and forgot to mention that he was quoting John McCain,” said Davis. “When Mitt Romney was asked if he was going to repudiate that ad, he said ‘what’s sauce for the goose is sauce for the gander.’”

“I’m taking the same standard, Stuart, that I expect you to apply to Romney,” said Davis.

Crosstalk ensued as the two shouted over one another.

Once the din died down, Davis insisted that he would not be on the program again unless he was allowed to finish a thought.

Varney went on to say that Mitt Romney rejected ads proposed by a loyal but independent PAC that would have linked Obama to Rev. Jeremiah Wright before they ever ran.

Davis contested Varney’s assertion that two lies are somehow apples and oranges, but he went on to say that it would not be hard for Obama to call on Priorities USA PAC advisor Bill Burton, who had previously served as White House Deputy Communications Director, to take the ad down.

After making clear that he found this offensive ad equivalent to those of Romney’s primary and general election campaigns, he went on to cite a number of inconsistencies and misleading assertions in the “cancer ad.”

“He knows perfectly well that misleading is just as bad as false,” said Davis referring to Burton. “This ad hurts Barack Obama.”