Stuart Varney Fires Back at Maddow’s ‘Lazy’ Attack on Fox: ‘She Got It Wrong’ 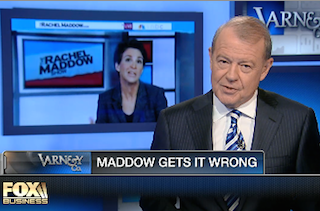 “Rachel Maddow took me on and she got it wrong,” Varney said Friday, saying “the face of NBC News” had “turned to the classic style of the left: demagoguery without facts.” He accused Maddow of “twisting” the truth to “fit her agenda.”

During her segment, Maddow took issue with a Chyron headline that ran during a segment on Varney & Co. that read: “Cheap Gas Hurts Economy?” 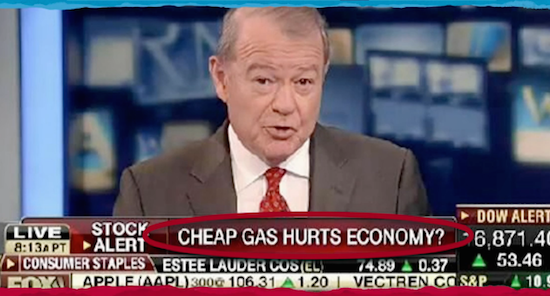 ‘We posed the question to debunk it. She didn’t care to take time to notice that very important detail,” Varney said, before playing a clip from Maddow’s show. “If Maddow watched just 15 seconds of the segment she showed so briefly on her program she would have known we were reciting a Wall Street Journal article that raised the premise of low gas prices hurting the economy. And we quickly dismissed that premise.”

After playing a series of clips from his show in which he and guests can be seen “cheerleading” the drop in gas prices, Varney said, “Rachel Maddow resorts to cheap tricks to rally her lefty viewers. Fox is an easy target and I was her latest prey. But she got it wrong, and was lazy when she did it.”