Study Finds That The “Sexier” The Anchorwoman Is, The Less A Male Viewer Remembers 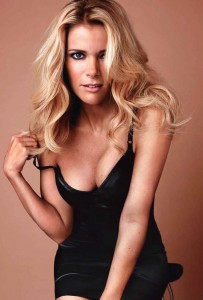 Here’s an interesting study that combines two of our favorite subjects: TV news and sexy people. Two Indiana University researchers have attempted to test how the attractiveness of a female news anchor affects the response from men in the audience. They found that the men remembered substantially less the “sexier” the anchor was. Clearly now that this study has come out, we’ll stop seeing the sexualization of newscasters, right? Right?

To do the study, the researchers took a 24-year-old woman and had her present a short newscast two times, one wearing a shapeless outfit and the other time dressed so as to accentuate her, as they call it, “waist-to-hip ratio.” They then had 400 men watch either of the newscasts and tested them on the content. Men watching the sexualized one retained significantly less information. When women were shown the same videos, their two groups retained equal amounts. A test has yet to be done with hunky dude anchors.

As the abstract for the study explains, the men not only remembered less from the sexy versions, they also found the woman less “suited” was politics and war reporting:

The experimental study reported here employed one of the most compelling visual cues of female sexual attractiveness (low waist-to-hip ratio) to test the influence of news anchor sexualization on audience evaluations of her as a professional and their memory for the news that she presents. Male participants saw the sexualized version of the anchor as less suited for war and political reporting. They also encoded less news information presented by the sexualized than her unsexualized version. Conclusions were drawn in line with evolutionary psychology expectations of men’s cognitive susceptibility to visual sex cues. Women participants, on the other hand, did not vary across conditions in their assessments of the anchor’s competence to report on war and political news. Moreover, they encoded more news information presented by the sexualized than unsexualized anchor condition.

It’s definitely an intriguing sounding study but I think it’ll be even more interesting to watch how it’s reported on. As this story gets picked up by different blogs, it’ll be fun to see which anchorwomen get called out the most in the images accompanying the piece.