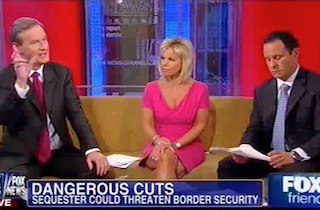 In a discussion about immigration reform, the Fox & Friends crew turned to the discussion about the politics surrounding the issue, segueing into eventually into “scare-quester” territory and how some of the cuts are hitting the country. That, in turn, co-host Gretchen Carlson to cite her frustrations with President Obama essentially taking “a pass” on leadership.

The automatic spending cuts are set to cut into the border security force, the hosts noted, but the border truly is a problem. “For two hours, our American border is going to be not protected,” Steve Doocy added, yet we’re spending “millions and millions and millions” on federal employees “who simply do not show up for work, or are paid to be on standby time.”

“It’s starts from the top,” Carlson argued. “I think if any of us was given…opportunity…of being able to lead and being able to have Congress say to the president of the United States, ‘You can have the power to look through everything you’re in charge of in this nation and you can check off what you want to cut’ — that seems to me that, I would love that opportunity to be able to finally put to rest some of this waste that has been pulling this country down for decades.”

Instead, “President Obama has basically said, ‘No, I’ll take a pass on that. I don’t want that leadership opportunity.’ That, to me, is stunning.”

Republicans offered him that chance, Doocy noted, but “he said, ‘If you give it to me, I’m going to veto it.'”