Suits With Socks and Lounging Dogs: Behind the Scenes at the Home Studios of Fox News Hosts 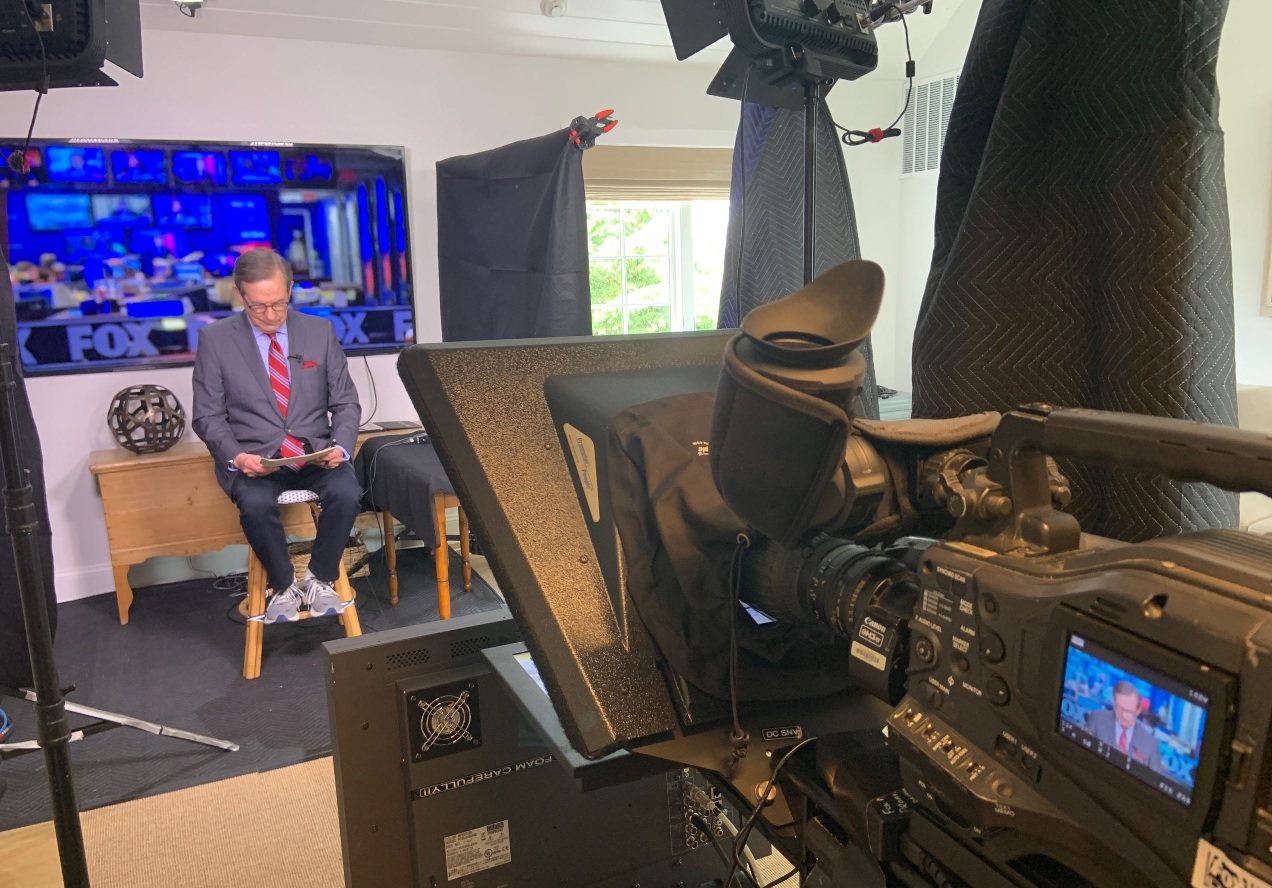 With the many faces of cable news working from home, we’ve been keeping a close eye on the makeshift home studios pundits are throwing together to keep the news on the air. Fox News sent over a series of behind-the-scenes shots of their hosts and anchors working and self-isolating from home — featuring full suits paired with socks, pets lounging just out of the shot, and lots of Apple products. 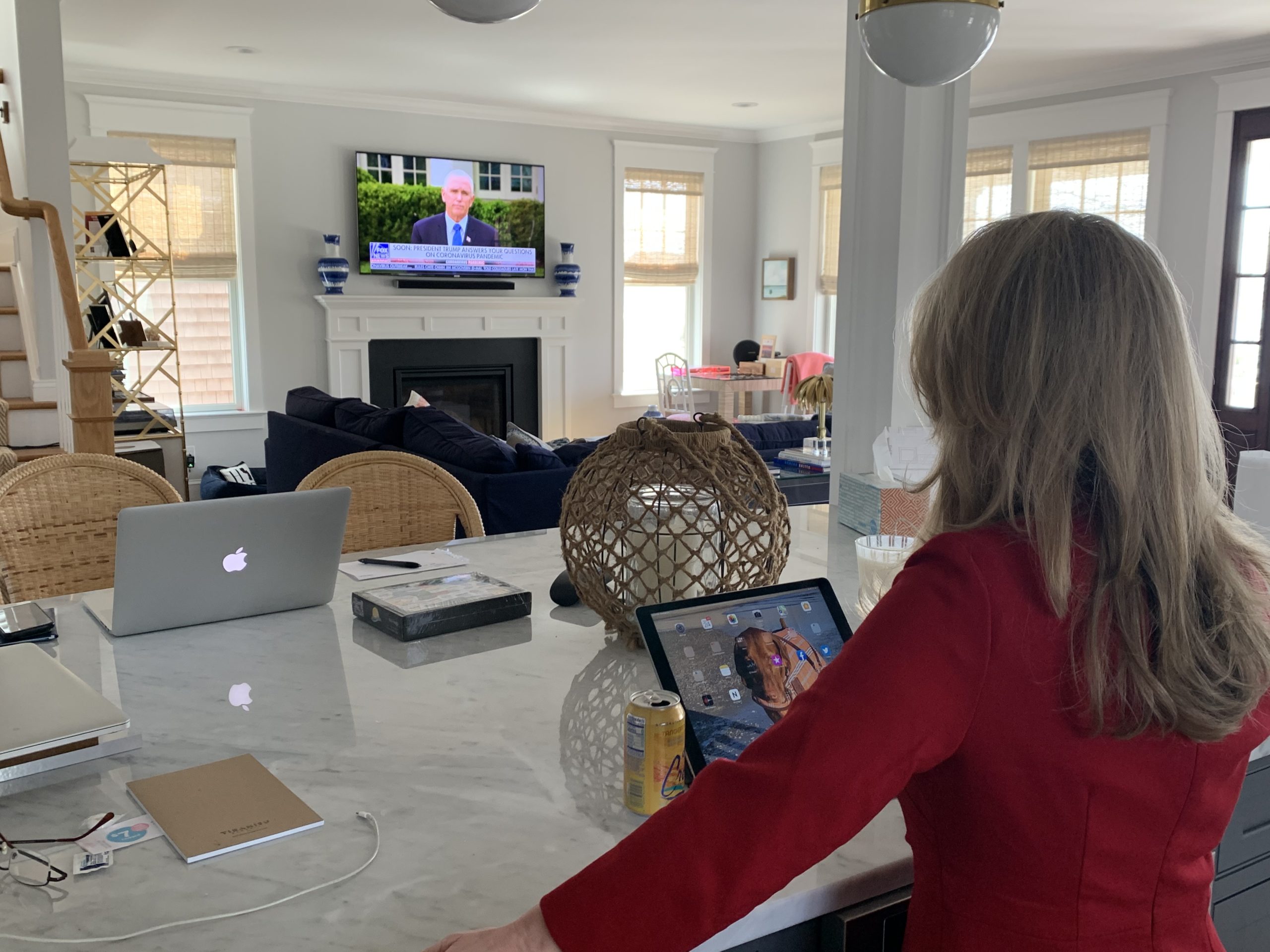 Dana Perino, host of The Daily Briefing and a co-host of The Five is an avid Apple consumer, with both an iPad and an Apple laptop pictured in the same room — which also has a television playing Fox News as she works. 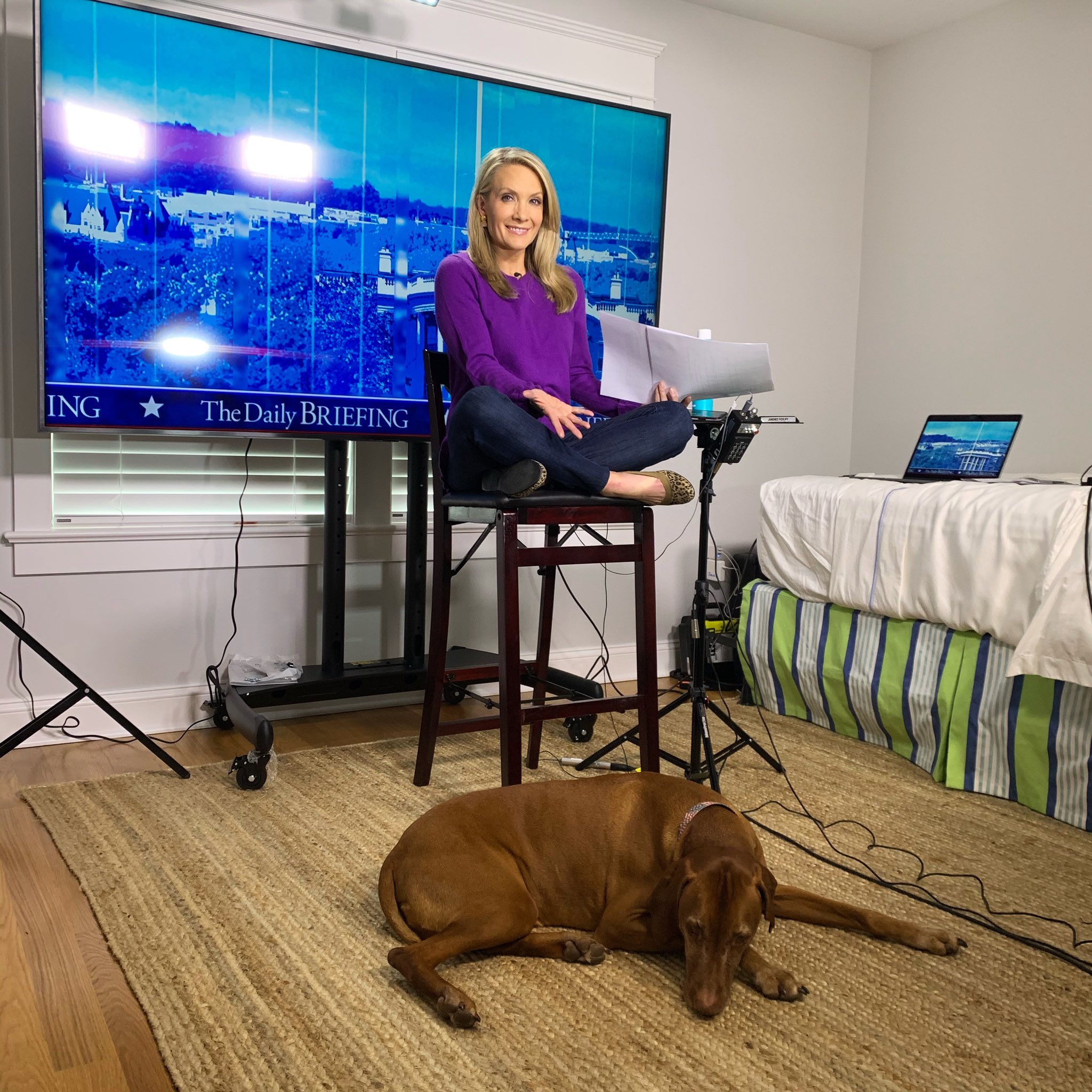 For her studio, Perino sits on top of a stall in front of a jumbo television on a stand with the necessary graphics, studio lighting, a laptop available by her side, and her dog Jasper on a rug by her feet. 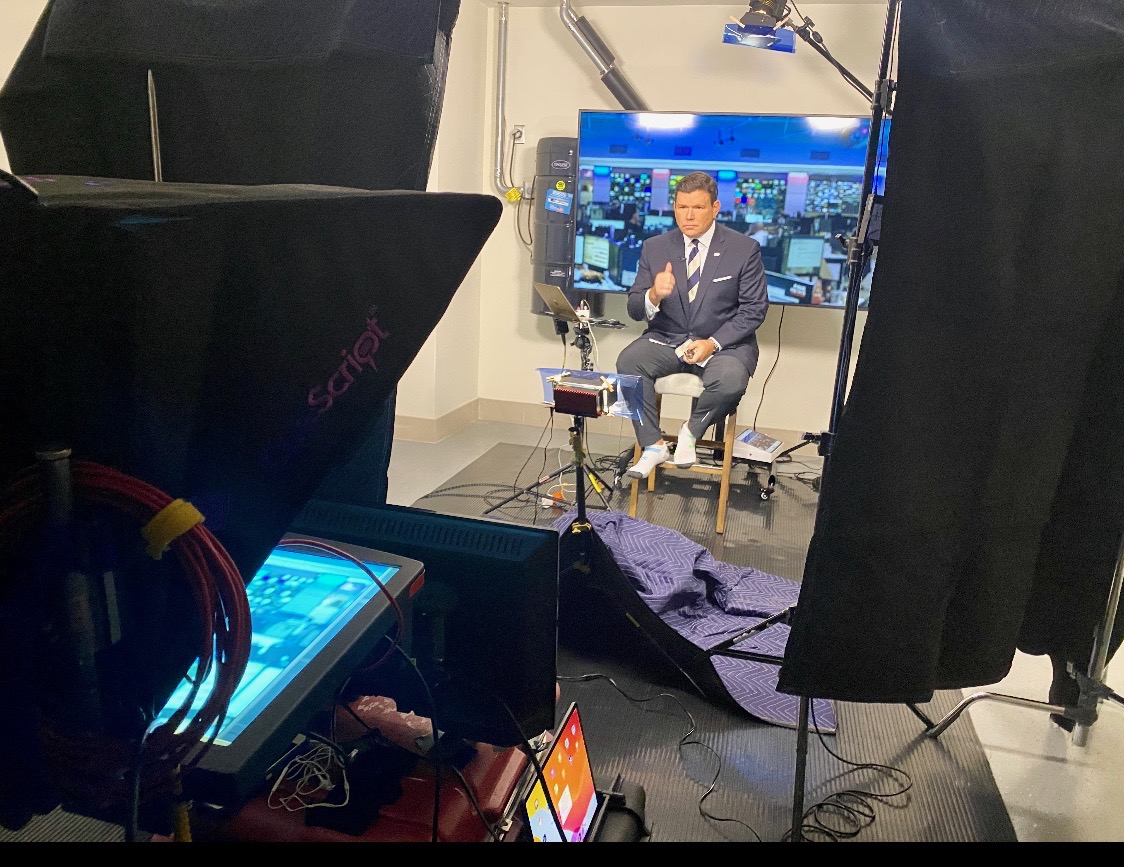 Similar to Perino’s setup, The Special Report host Bret Baier also uses a stall in front of a large television, with studio lighting and a teleprompter ahead. 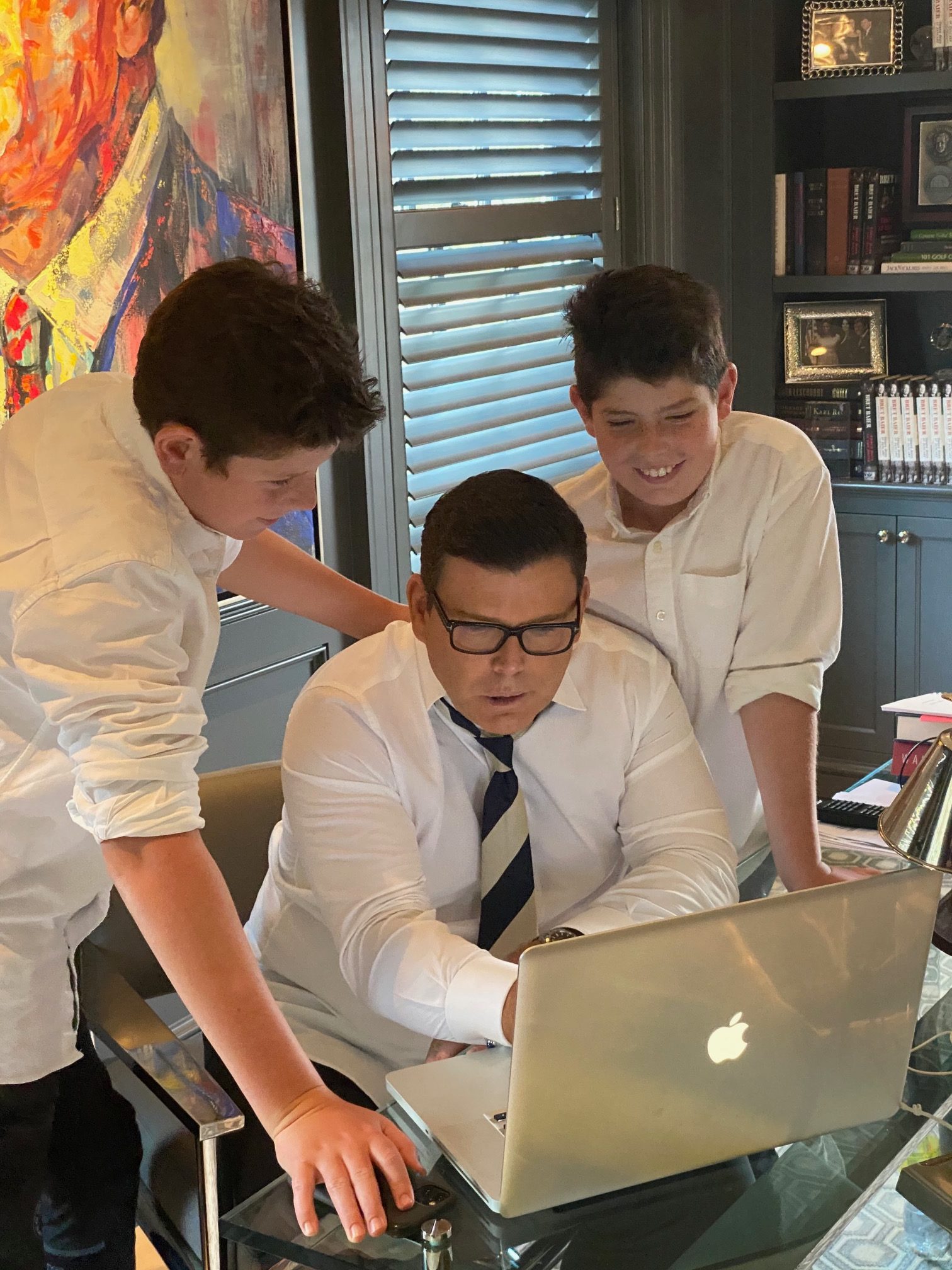 Also like Perino, when away from the camera, Baier appears to be an Apple consumer — pictured above at his desk with an Apple laptop and his two sons. 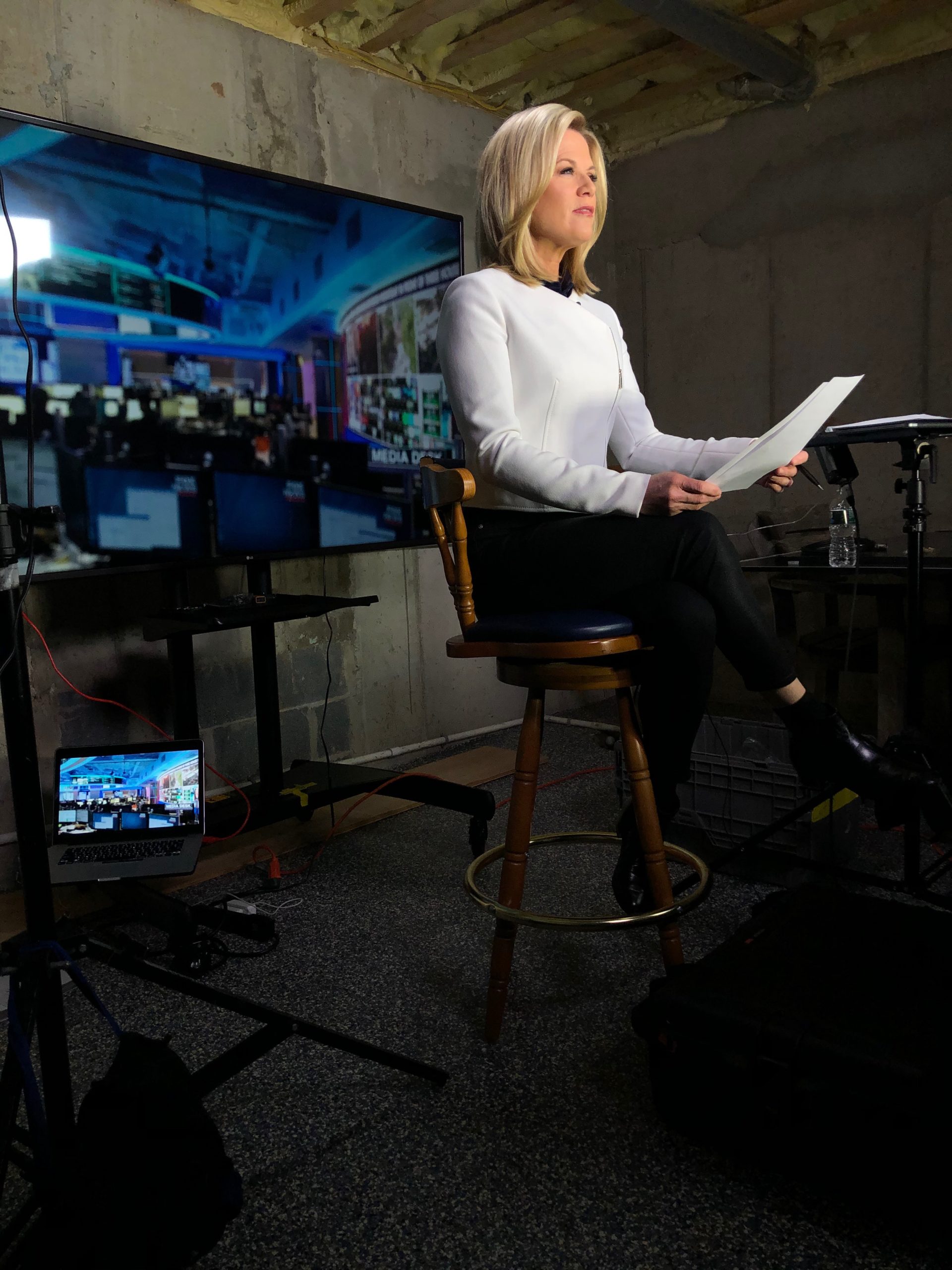 The Story‘s Martha MacCallum also follows the typical Fox News home studio setup with a stall in front of a television on a stand — her laptop connected — and studio lighting ahead.

Unlike others, MacCallum’s setup appears to be situated in her basement. 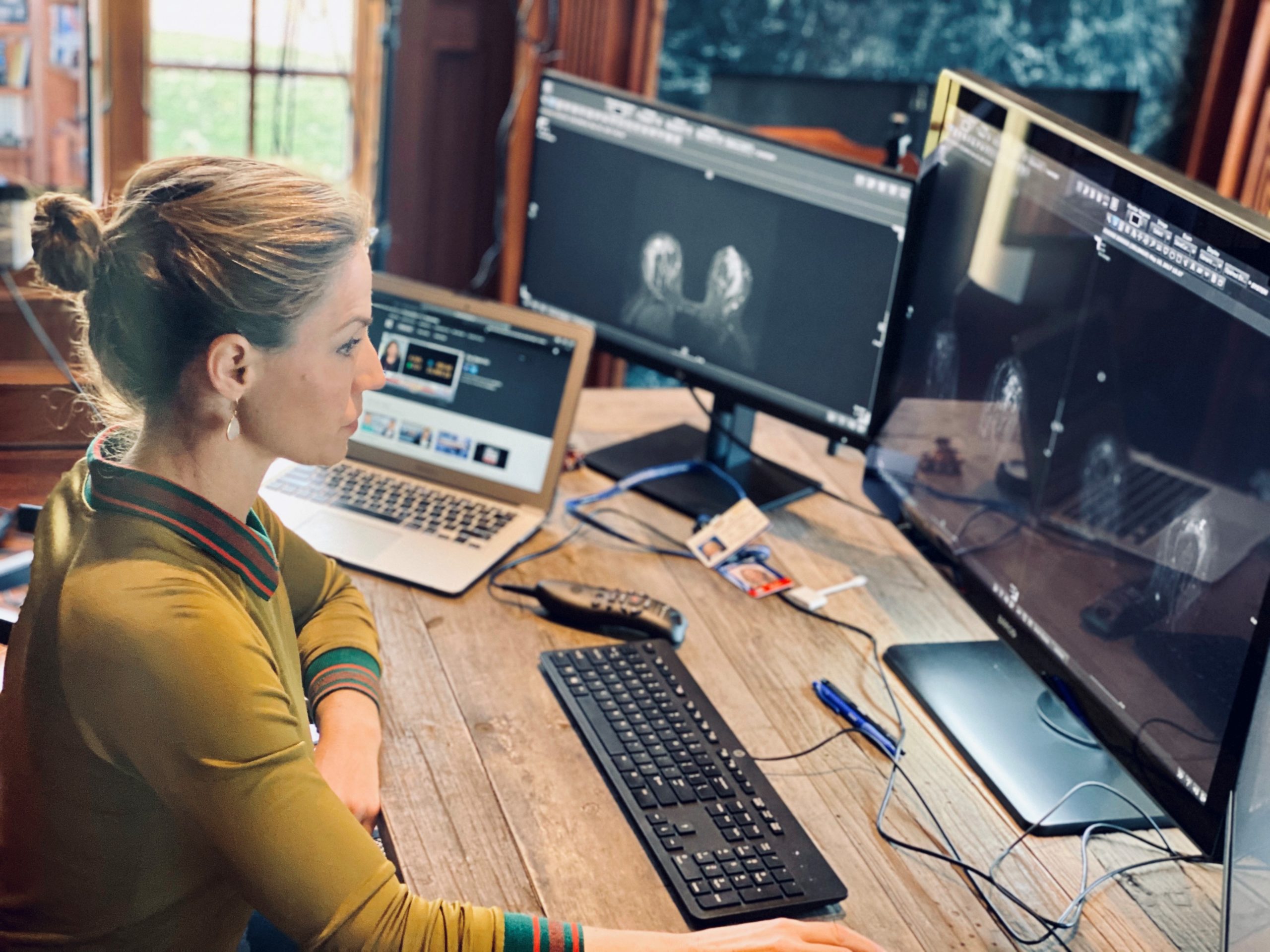 Fox News contributor Dr. Nicole Saphier rocks a whopping FIVE computer monitors and a laptop at her wooden desk in front of a large wooden bookcase, which can provide an attractive backdrop when on the air. 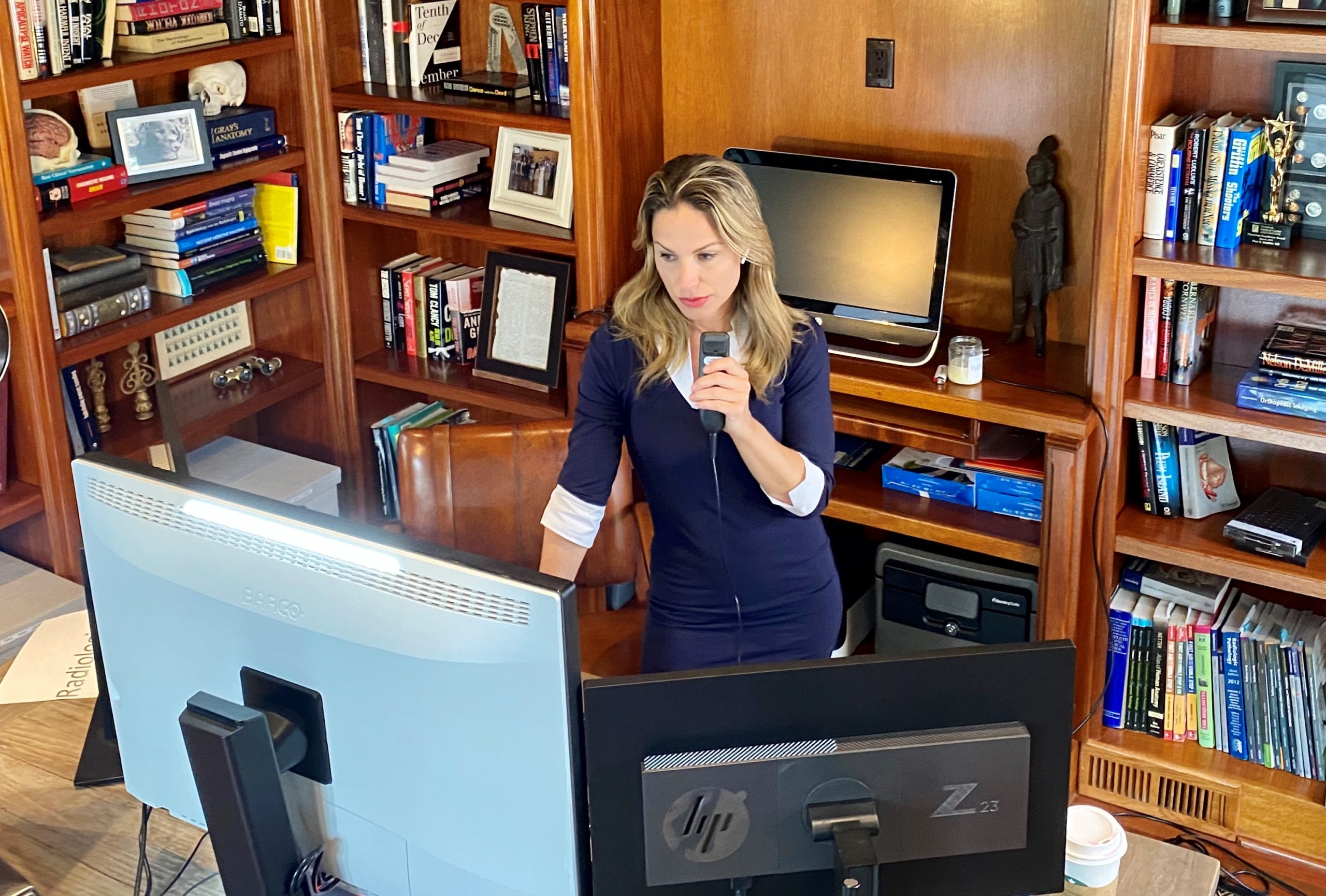 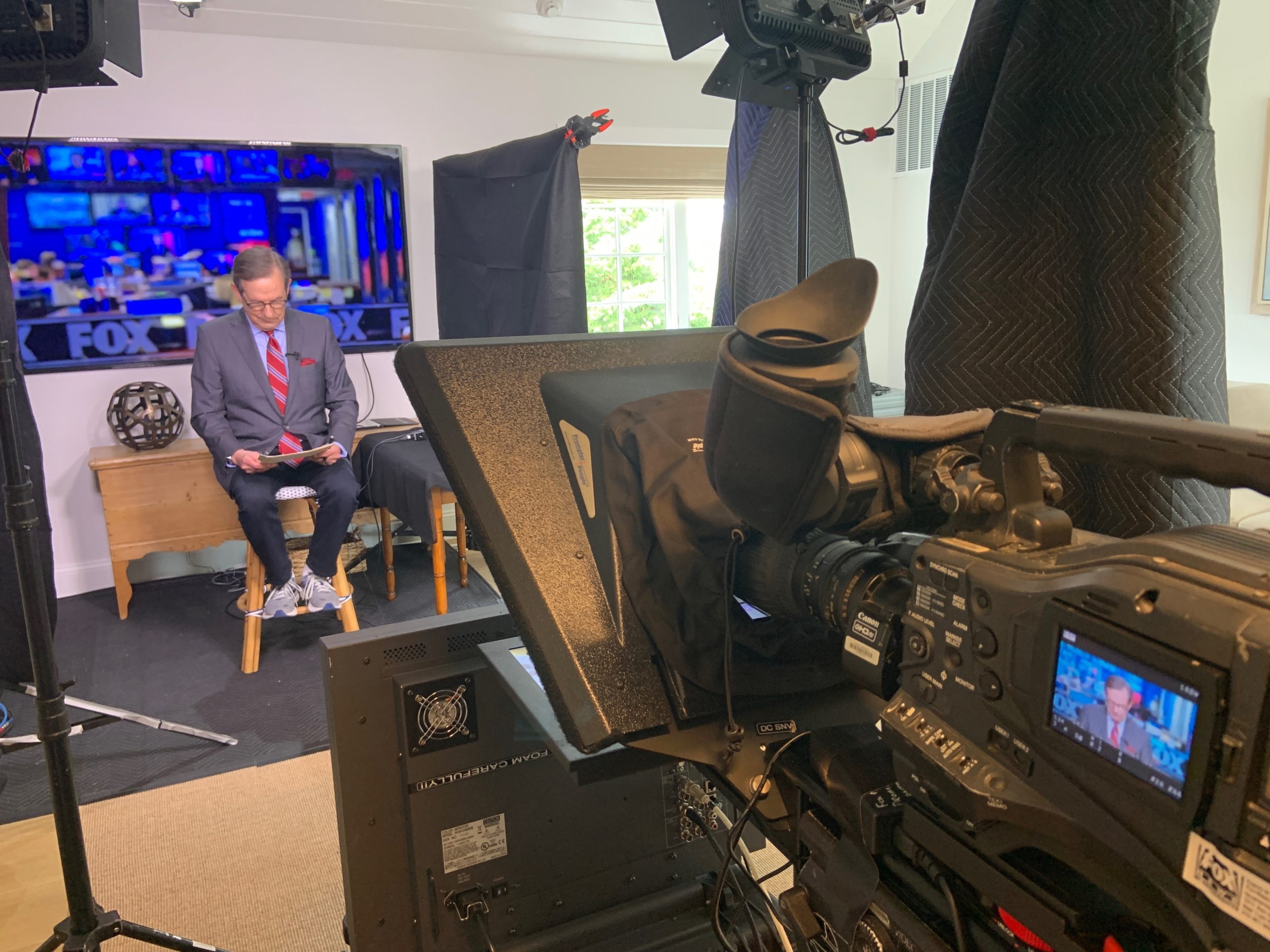 Fox News Sunday’s Chris Wallace has the addition of wooden cabinet behind his stall and by the large television, which is mounted on the wall as opposed to a stand. His studio lighting, camera, and teleprompter ahead, with curtains to the side to block off natural light. 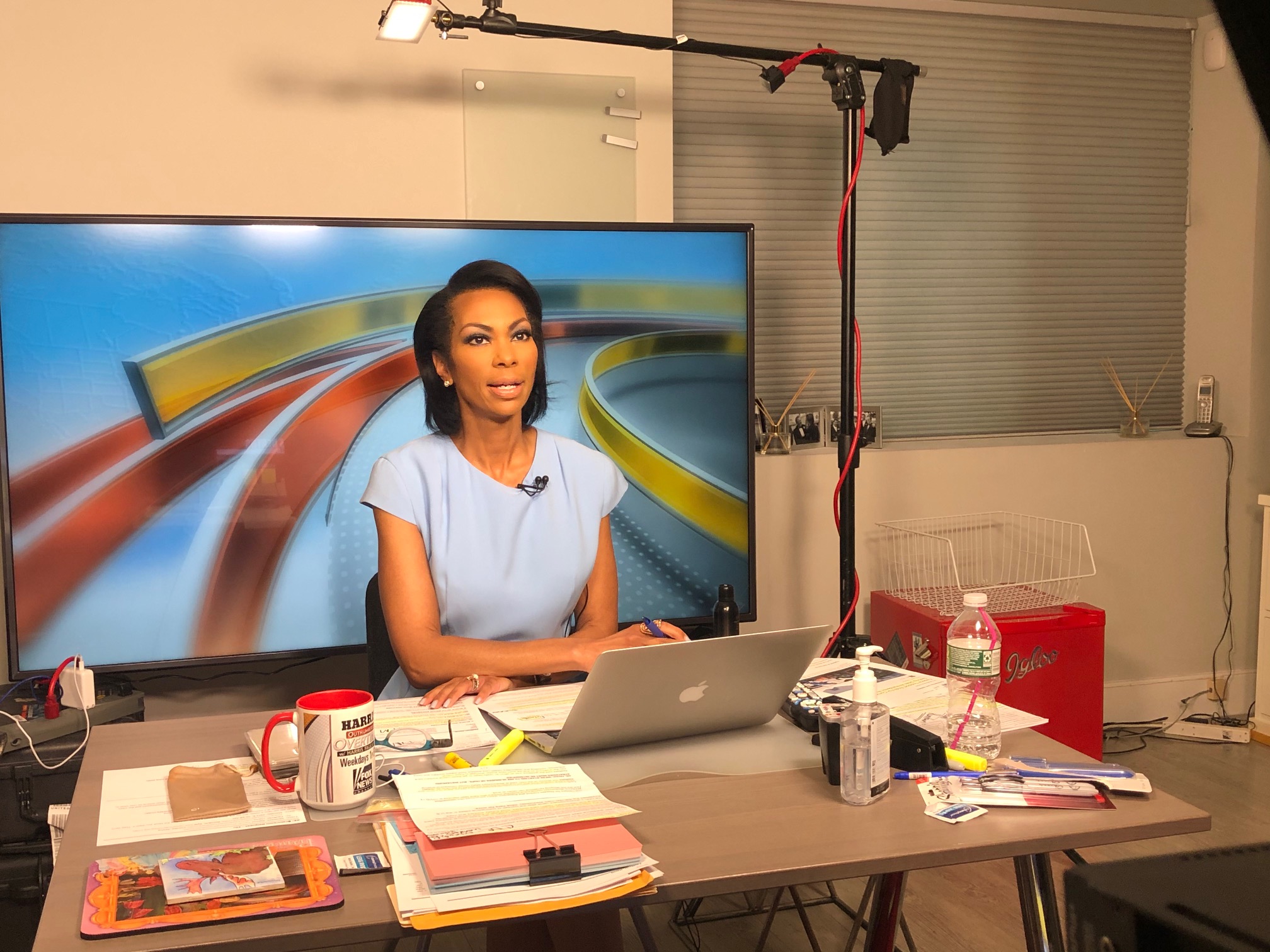 Finally, Outnumbered’s Harris Faulkner diverges from the majority of her Fox News peers by sitting in front of a desk, with notes, water, hand sanitizer, and her laptop readily available. A television screen sits behind with the addition of an extra mini studio light. 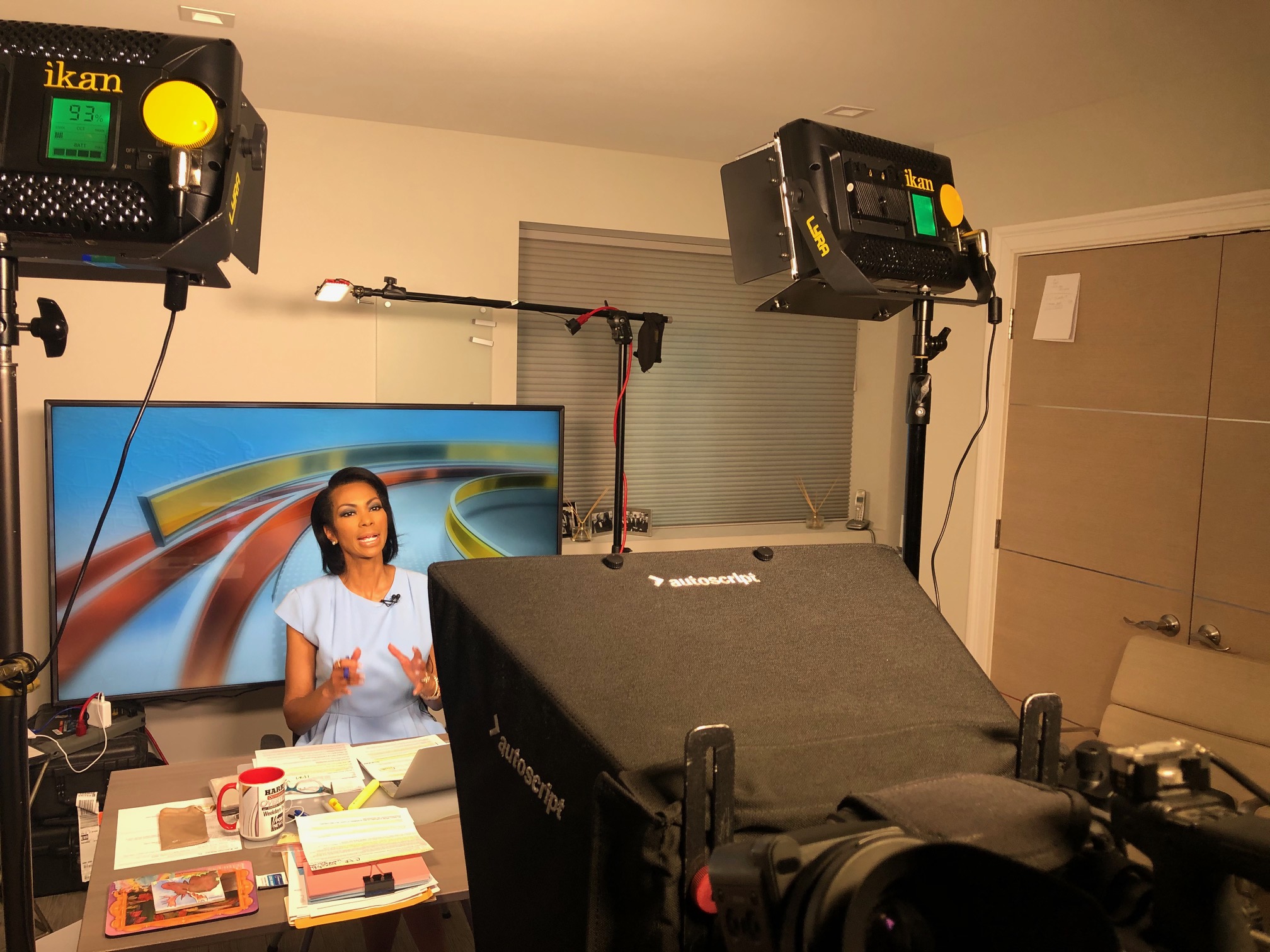 Other studio lights, the teleprompter, and camera are close in front.

Some home setups from the co-hosts of The Five could also be seen in the show’s new social distancing PSA this week.

The PSA showed Jesse Watters in a shirt, tie, blazer, and pink shorts sat in front of his home studio, Juan Williams watering flowers in his garden, and Perino talking to her dog Jasper about “the latest press conference.”