Sunday Show Round Up: Bergdahl Release Gets Hosts to Step Up Their Game
SUNDAY SHOWS

Sunday Show Round Up: Bergdahl Release Gets Hosts to Step Up Their Game 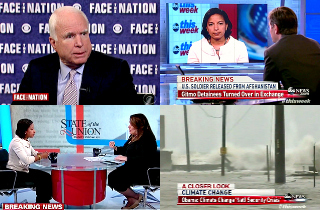 Perhaps I’m just habituating to these weekly rituals of conventional wisdom-building, but the Sunday political shows’ handling of the Bergdahl release yesterday seemed to momentarily justify their existences. A single issue, about which some but not a lot is known, and on which talking points have not quite yet hardened: if the Sunday shows are ever going to make a decent show of things, those are the ripe conditions.

So first Candy Crowley and then George Stephanopoulos questioned National Security Advisor Susan Rice — how she goes on the Sunday shows without getting the shakes is beyond me — about everything from whether the U.S. negotiated with terrorists to secure Bergdahl’s release to how they justified excluding Congress from the proceedings to whether the freed Taliban detainees would hop right back on to the battlefield.

Rice was evasive, but unlike a normal Sunday interview when each topic gets at most one followup, the hosts pressed their concerns. They did not, of course, leap from their chairs and accuse Rice of playing YouTube yahtzee while four Americans died in the Oval Office, so the Newsbusters crew is unhappy. But the rest of us got a respectable parsing of the administration’s gauzy explanations:

Over on Face the Nation, meanwhile, Senator Crankypants showed why the Sunday shows can be such repositories of misinformation. Here’s McCain, pulling giant numbers from out of thinning air:

Bob Schieffer registered his incredulity at this statement, but nobody at the table was equipped to challenge it, as it wasn’t even really an empirical claim. But now that big magic number — “thousands” — is out there for anybody who wants to believe it.

Likewise, Stephanopoulos let whopper after whopper from the Chamber of Commerce and the coal industry fly by in a too-rare segment on climate change. If the release of an American serviceman was prime condition for the Sunday shows, climate change has to be the polar opposite: a tangled issue where one side is clearly dissembling at hyperspeed. Stephanopoulos, who admirably prosecuted the administration’s case earlier in the hour, watched the climate change issue spin by him.