Sunday Show Round Up: Everybody Sorta-Kinda Gets Along Edition
VIDEO

Sunday Show Round Up: Everybody Sorta-Kinda Gets Along Edition 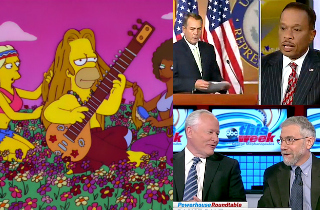 Perhaps it’s the spring weather. The Sunday shows were relatively muted yesterday, and even featured a couple moments of genuine comity. Juan Williams tipped his hat, figuratively, to House Speaker John Boehner (R-OH) for sorta-kinda opposing the obstructionist flank of his party, while Bill Kristol, gulp, agreed with Paul Krugman on the Cliven Bundy fiasco. (Note both of these cases involved conservatives stepping back from the fringes of their ideology.)

It didn’t hurt that most of yesterday’s villains were extra villainous. Nobody in the world wants to stick up for Donald Sterling, and not many more want to defend Bundy. (S.E. Cupp did her best for the latter on CNN’s State of the Union, but there’s just no there there.) Perhaps it says something that we need the awful scarecrows of explicit racism to ever come together on these issues.

Anyhoo, is there an issue on which we feel less chummy than condemning out-and-out racism? Economic inequality should do. Here’s another classic entry in “Krugman is a human trash compactor for Kristol’s spin” genre:

I suppose there’s some logic to pairing Krugman, the most policy-oriented of all the Sunday show guests, with George Stephanopoulos, who’s constitutionally incapable of talking about policy outside of a Beltway/horse race/double down/game change framework. At least with Krugman at the table you know 25% of the talk will intersect the actual experience of policy rather than its political refraction.

But just imagine a Sunday show roundtable with four people of Krugman’s policy expertise — imagine James Pethokoukis and Avik Roy, say, in the place of Kristol and Matthew Dowd — rather than a TV commentator, a former Bush strategist, a party hack, and George “how is this going to play out politically” Stephanopoulos. I mean, why even talk about Thomas Piketty and economic inequality if you’re not going to discuss policy? Why not just have another segment on 2016?