Sunday Show Round Up: How Cold War-y is the Situation in Ukraine?
SUNDAY SHOWS

Sunday Show Round Up: How Cold War-y is the Situation in Ukraine? 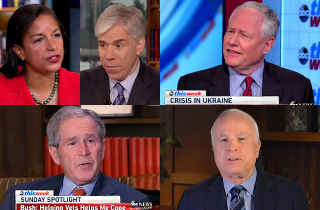 We semi-rational language-shackled bipeds love analogies, and political media figures in particular love historical analogies. This isn’t an inherently bad thing, and, in fact, is one of the ways political media has of digesting the complex and constantly changing subjects they cover on a daily basis. Which is to say: it was a structural necessity that the context-specific chaos in Ukraine would become, once rendered through the Sunday shows, the beginning of “another Cold War.”

Is it? Short answer: nyet. “It’s not the Cold War,” Tom Friedman answered on This Week With George Stephanopoulos. “The Cold War was a very specific thing. That was two nuclear-armed powers and competing ideologies, truly playing on a global chess board.” You know it’s bad when Tom Friedman is cautioning against over-extending an analogy.

Meanwhile, Bill Kristol, who never met a deployment he didn’t like, thinks the chilled version was forty-five years of awesomeness. As a classmate of mine once put it, the Cold War did give us a lot of good Pink Floyd albums.

A smarter version of this debate occurred when David Gregory ran down the list of ways Putin has jabbed the US in the eye and asked National Security Advisor and Person Who Attacked Benghazi While Issuing a Stand-down Order and Also Ran ACORN Probably Susan Rice why the U.S. shouldn’t treat 2005 Super Bowl champion Vladimir Putin as an enemy. Rice’s answer: Putin acts with the U.S. on a number of issues, and simply because our interests and his very often diverge doesn’t automatically promote him into Geopolitical Foe. You could take issue with that, but it’s better than lighting a votive candle for The Hunt For Red October:

Speaking of Benghazi, let’s not.

Speaking of Donald Trump, let’s not.

Question of the day: Martha Raddatz asked George W Bush if his new pro-veterans project (points to him) was helping him cope with the wars of his term. I’m sure those wars he started but didn’t serve in must have been rough. Perhaps he can tell Bill Kristol about them, as we’re only a few years away from Kristol pining for the days of Fallujah.