Sunday Show Round Up: Romney Gloatzilla Tour 2014
SUNDAY ROUND UP 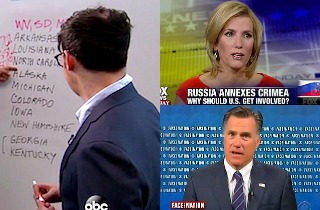 Former 47%-vote getter Mitt Romney made what one hopes was his last stop on his Gloatzilla 2014 Tour, in which he reminds everybody that he correctly named America’s #1 geopolitical foe (not threat, mind you) during the third presidential debate in 2012 and therefore should be retroactively made CEO of America.

The one problem with this, as with most people calling the president weak/feckless/naive, is there’s not much daylight between the various positions on U.S. Russian policies, either pre- or post-Crimea. Romney/McCain/Graham et al would have talked tougher to Russia than did Obama/Clinton, but aside from the removal of missile defense sites from Czech and Poland, there doesn’t seem to be much substantively different they would have done. Basically the Romney is arguing that that single action, plus a difference in tone, would have kept Putin from invading Crimea. Or, in the very qualified language of the also-ran yesterday morning:

“Not having anticipated Russia’s intentions, the president wasn’t able to shape the kinds of events that may have been able to prevent the kinds of circumstances that you’re seeing in the Ukraine.”

I’m amazed the Romney 2012: For the Potential of a Slightly Different Set of Events That May Have Possibly Led to Different Kinds of Circumstances Maybe platform didn’t play. This is a reminder, in case we needed one, that we don’t want a Commander in Chief who talks in business-ese. You watch clip now:

Meanwhile, this week’s Always on Message Award goes to Laura Ingraham, who got from Ukraine to her daily hobgoblin immigration in a skip and a jump. (Watch the other panelists silently agree to disinvite her from the post-panel scotch across the street.)

The bonus to Ingraham’s newfound anti-war stance: she was diehard for the Iraq War. That nobody seems to connect the exhaustion of both American military and patience from that war and the public’s reluctance to take stronger stances against Assad and Putin makes all this talk of Obama’s “fecklessness” extra irksome.

Last, This Week With Eventually Martha Raddatz tried to do live-action wonking. It came off like a bad episode of The Daily Rundown, and managed to make Nate Silver look simplistic, which he’s not. At any rate, I’m with this guy:

Did Dems need 538 to figure out that Senators Begich, Hagan, Pryor, Landrieu, Walsh were in big trouble? #revelations