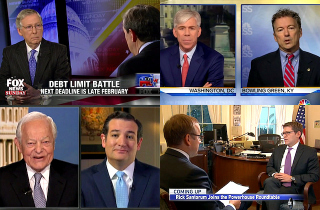 The Sunday political shows are never at their worst than when they’re in advance of an event. Messieurs Gregory, Stephanopoulos, et al can postmortem the hell out of a debate or a gaffe or press conference or even a perennial event like the end of December. (So many chances for retrospection!) But previewing something like the State of the Union appears to give everybody gas.

Thus the Sunday shows all spent far too much time yesterday pitching the question, “The state of the union is ______.” The responses were about as enlightening as you’d expect, and a couple of folks even remarked on the obvious fatuousness of the inquiry. Seriously, just talk about Bridgegate or something.

Here’s Why Everybody Hates Sunday Shows

ABC News’ Jonathan Karl sat down with White House Press Secretary Jay Carney—they have a past—and asked if Carney the TIME Magazine Washington bureau chief would be happy with the level of access he get to Press Secretary Carney’s White House. “We provide an extraordinary amount of information and access to reporters and we work every day to provide more,” Carney replied.

I know what you’re thinking: that’s when Karl unleashed a blitzkrieg of obvious followup questions, like “Huh?” and “Are you kidding me?” and “Isn’t your press office still in a dispute with press photographers who’ve called your press policies Orwellian?” and so forth.

Nope: that statement was the end of the interview. Keep in mind, this was a pretaped segment. It’s not like Karl had to throw to commercial. He could have extended that thing ten, twenty, sixty minutes if he wanted. He didn’t. He just left that bald mendacity sitting there. And that’s why people hate Sunday shows.

I know it’s old hat at this point to complain that Senator Ted Cruz (R-But Enough About You) is—gasp—rude, but every once in a while he deploys his brashness in a way that makes it seem fresh, in both senses of the word. To wit, Cruz all but called venerated and veteran journalist Bob Schieffer stupid on his own show, patiently explaining that while Old Man Schieffer may be distracted by Democratic talking points on the government shutdown, it was he, Ted Cruz, who really—

Schieffer laughed Cruz away, twice. “Senator, I know what Republicans were telling me, like John Boehner (R-OH), who said this was the disaster and never again.” Cruz, ever the lawyer, tried to cross-examine him, and Schieffer, ever the pro, rolled on to the next question as if Cruz were an uppity teenager mouthing off at the dinner table.

Yes, Cruz’s whole schtick is the unmediated upstart who doesn’t care whom he offends, but the operative word there is offend; it doesn’t work when the guy who’s supposed to be shocked can’t keep a straight face while talking to you. Watch the dealie below, via CBS News:

Rand Paul: There Is No War on Women, But Women Won It, But Democrats Are Really Waging It

In much the same key, if not the same rhetoric as Mike Huckabee earlier this week, Senator Rand Paul (R-I Know You Are But What Am I) tried to jujitsu the War on Women into an anti-Democrat talking point and wound up with his foot behind his ear. There is no real War on Women, you see, the Democrats made it up, but it also exists because they’re the ones waging it, even though they made it up, but women are winning the war on women—Paul knows this following an exhaustive survey of those with the last name of Paul—but it doesn’t exist but Democrats are waging it. Also, Bill Clinton.

Shorter Mitch McConnell (R-Derp): we have to attach something to the debt ceiling to control this outrageous debt, like…the Keystone Pipeline, which would add jobs. In McConnell’s parts, I believe that’s called the ol’ bait-n-swtich.