Sunday Show Round Up: Vanished Plane Leaves Pundits Staring into Epistemological Void
SUNDAY SHOW ROUND UP 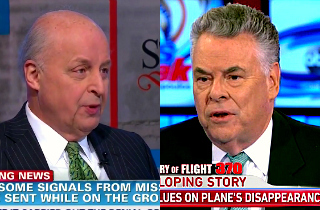 “We don’t know” was invoked about as often as possible on the Sunday shows yesterday morning, as the disappearance of Malaysia Airlines flight MH 370 and the tense wheel-spinning truce between Russia and Ukraine left politicians and pundits in an epistemological netherworld (or at least more so than usual).

As we’ve discussed before, the Sunday shows usually love a vacuum, as it allows for endless speculation with little chance that one could smack into any brick wall of facts. But such speculation has long been exhausted on both the situation in Ukraine, which has been scraped clean by the last two Sundays, and the vanished plane, which has been conjectured to death by a week’s worth of (profitable) cable news coverage.

Moreover, there seemed to be a creeping awareness on Sunday that any further unfounded speculation on, say, the potential terrorist action behind the disappearance of flight MH 370, was actually deleterious to the conversation. Watch, for instance, Representative Peter King (R-NY) — who normally spies terrorism lurking in any shadow — actually stop and correct himself mid-aspersion several times in this segment:

He wants it to be those Iranians, really really badly. But there’s just nothing there, and even he doesn’t really think he should be putting out the terrorist vibe when he can’t back it up. That was Sunday in a nutshell.

Meanwhile. former Director of National Intelligence John Negroponte showed what happened if you took the other tack and answered every question with “I don’t know.” State of the Union host Candy Crowley kept throwing out theories, and Negroponte kept shrugging, as if to say, you can believe that if you want, or its opposite, or anything in between, there will just be no facts to back you up. If it were up to me, Negroponte would be on every Sunday show, shrugging after every comment, and saying, “That’s pretty wild.”