Sunday Show Round Up: When In Doubt, Waterboard Somebody
SUNDAY SHOWS

Sunday Show Round Up: When In Doubt, Waterboard Somebody 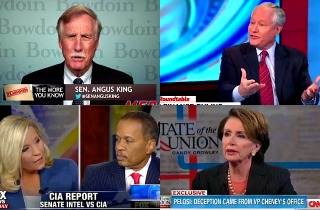 The Senate’s upcoming report on the CIA’s use of enhanced interrogation techniques (torture, for those of you scoring at home) had everybody up in arms Sunday morning, especially as the case scrambles typical partisan dance steps. Most if not all lawmakers see the need for intelligence, and many fear too softly enforcing counterterrorism measures rather than too avidly; yet torture stinks of the Bush years’ moral wasteland, and few save Dick Cheney really want to defend torture. What’s a politician/pundit to do?

When in doubt, waterboard somebody. Or at least threaten to: the best display of genuine, spontaneous emotion in recent Sunday show history has to go to Senator Angus King (I-ME), who, upon hearing a soundclip on Up With Steve Kornacki of that selfsame Cheney dismissing waterboarding as a light country drive, offered to do it to the man himself:

Meanwhile, Liz Cheney gave what was no doubt a dispassionate defense of her father’s role in the introduction of torture to the CIA’s repertoire. (I guess once you’ve thrown your old fishing buddy overboard, everything’s fair game.) Cheney the younger thinks “it’s fine that we’re having the debate” on torture, which is pundit talk for “I’m right, but the rest of y’all can continue to squabble about it if you want.”

Professional up-faller Bill Kristol, who was defending torture two weeks ago before it was cool, is now defending the Koch Brothers. He also thinks the GOP should try to tie Democrats to the insurance companies over Obamacare. So, after six years of calling Obama a socialist, they now want to tar Obama for working with the market. That, kids, is a master class in spin.

Or there’s spin’s opposite. When Candy Crowley asked Nancy Pelosi if she thought there would be any repercussions were Cheney found to have tiptoed over the legal limit with regards to torture, the minority leader said, “I think he’s proud of it.” He probably is; when in doubt, waterboard somebody.