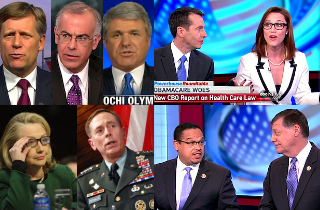 In an otherwise slow news week, the CBO’s projection of the Affordable Care Act’s effect on the labor market made a resounding (and inaccurate) boom. This Week With George “Jon Karl” Stephanopoulos got right down to the most crucial consequence of any earthbound event: how will this impact the next two elections?:

Accusing someone of spin on the Sunday shows is like accusing them of wearing makeup.

Representative Keith Ellison (D-MN) pointed out that Americans work considerably more than our counterparts in developed Western countries, a point worth discussing with all the focus conservatives have given lately to the family’s role in economic mobility. Meanwhile, S.E. Cupp had an interesting gloss about the project of economists to develop a welfare system that doesn’t discourage work.

These two should have been talking to each other. Instead, we got a lot of political blahdedy-blah about who’s spinning what and how will it play in the midterms.

In Russia, Sunday Shows Watch You

Representative Mike McCaul (R-TX) sounded almost impatient for a terrorist attack at Sochi. Meanwhile, U.S. Ambassador to Russia Mike McFaul reminded everybody that Russia is actually our ally on a lot of issues, and by the by, they’re totally spying on you, so get over it. (He failed to tie this in to Snowden, for obvious if disappointing reasons).

Incidentally, if the U.S. had any interest in asserting its cultural diversity during this Olympian fortnight, spotlighting two gray-haired white dudes named Mike McCaul and Mike McFaul on Russia was not the way to do it.

Any GOPer hoping to use #BENGHAZI as a bludgeon against the ohmygodisitoveryet Hillary Clinton campaign must now reckon with General David Petraeus’ estimation that she was “resolute” about the whole thing. Expect the GOP to begin disowning Petraeus as an Trostkyite adulterer starting pretty much now.

David Brooks just wrote four-to-eight years’ worth of columns. Nice work if you can get it.