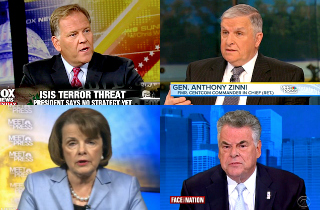 The political press corps in general and the Sunday shows in particular have spent weeks imploring President Barack Obama to “do something” about ISIS, so you’d think the news that the U.S. used targeted air strikes to help Iraqi military forces break a two-month ISIS siege on the northern town of Amerli yesterday and liberate 15,000 Turkmen would have been heralded by the five Sunday shows this morning.

Nope: the shows each led with mention of a “new breakthrough” in the fight against ISIS but devoted almost no time to it — less than two minutes combined across the five major shows. With the exception of one more mention by a CNN guest, they didn’t return to it.

Instead, in a perfect study of how quickly and completely talking points reform when contradictory information is introduced, the shows immediately pivoted to the standard hawkish guests who repeated their predictably hawkish positions as if yesterday’s strike had never happened. So you had Mike Rogers and John McCain decrying the domestic threat of ISIS; so you had Peter King calling on Obama to lead, whatever that means; so you had a retired General telling people that two brigades of U.S. soldiers would do the trick in Iraq, as if the American public hadn’t been told how simple and easy Iraqi combat operations would be before.

Obama as a dithering and feckless president who golfs while the world plunges into chaos is an attractive image for the hawks in Congress and neoconservative pundits who can use it as a foil to make themselves sound tough while being vague about the hugely consequential actions they demand. A responsible political press corps would feature these views as one side — and a decidedly unpopular side — of the argument, and demand they account for the ramifications of their policies. As we saw last week when Chris Jansing actually challenged Rogers to produce evidence that ISIS posed a direct threat to the U.S., the hawks’ warnings sound much more dire in the abstract than they do in detail.

Instead the hawks are overrepresented on the shows — McCain and Lindsey Graham alone get more airtime than anybody urging caution in involving the U.S. in more Iraqi military operations — while their views face scant skepticism. McCain et al should have been interrogated today on whether the U.S.’s three victories against ISIS at Amerli, Mount Sinjar, and the Mosul Dam in fact revealed ISIS’ vulnerability; whether the success of targeted air strikes in assisting Iraqi ground troops meant the U.S. could play a significantly limited role against ISIS while emboldening Iraqi forces; and if so, whether they felt it worth contravening American public opinion to insert ourselves once more into the region, at the potential cost of embroiling the U.S. in yet another interminable quagmire.

Moreover, the hawks should be asked whether the successful air strikes represented the U.S. “doing something” about ISIS; if liberating towns isn’t “doing something,” what is? Most likely the neocons would contrive some reason the Amerli victory did not count, which would reveal their position to be an ideological one that sees U.S. military action as an end rather than a means, a blustery belief that never changes according to the events of reality, because it was never in response to them in the first place.