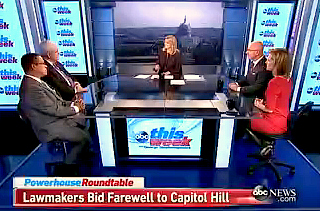 Exactly two years ago today, Adam Lanza burst into the Sandy Hook Elementary School in Newtown, CT and shot and killed twenty-seven people, twenty of them children. The mass shooting — the second largest in U.S. history — blindsided the country, was called by President Barack Obama the worst day of his presidency, and induced one of the most serious pushes for gun control in recent memory.

That push failed. Two years later, support for lax gun laws are at an all-time high. And for further evidence that the appalling massacre that once seemed a permanent stain has already faded, look no further than the five primary Sunday political shows — Meet the Press, Face the Nation, This Week, Fox News Sunday, and State of the Union — which didn’t cover the anniversary at all. In fact, the only mention that came during the shows was a commercial for a 60 Minutes segment later this evening, according to TVEyes. For comparison’s sake, State of the Union found time to discuss “lawmakers’ holiday memories” while This Week hosted yet another panel on Jeb Bush 2016.

If the shows needed a bigger peg on which to hang a segment on guns, they could have done worse than the long-overdue confirmation of Vivek Murthy for Surgeon General, made suddenly possible by Senator Ted Cruz’s bizarre audible this weekend. Murthy’s confirmation has been held up by pressure from the NRA, which objects to Murthy’s characterization of guns as a public health issue — a position he expressed just two months before Adam Lanza burst into Sandy Hook Elementary School.