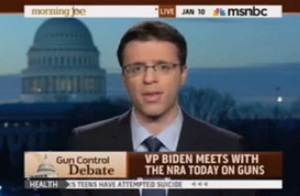 I may be paraphrasing a bit, but on Thursday morning’s Morning Joe, MSNBC contributor and Washington Post über-wonk Ezra Klein was asked to give his read on the chances for new progress on effective gun regulation in the wake of the Newtown tragedy, and served up a bucket of ice-cold water. He’s not the only pessimist on gun regulation, but hearing a well-respected, plugged-in liberal like Ezra Klein say that even a weak assault weapons ban will be a “very large lift” is (a little bit) like hearing Walter Cronkite say that the Vietnam War was unwinnable.

Co-host Willie Geist asked Klein if, in the wake of the mass shooting at Sandy Hook Elementary School, the demand to see something change could overcome the NRA’s opposition. “Will this time be different?” he asked.

“It’s not clear that this time will be different,” Klein replied. “Remember, anything that they do — Vice President Biden gestured towards the ability to use executive actions on a couple of issues, you can do a couple of things related to tracing data, and other elements of how we do law enforcement on guns. You can’t do a ton about gun law through executive action. Anything they do will have to pass the House of Representatives.”

It’s true, there isn’t nearly enough that can be done through executive actions, but surely, the overwhelming public support for…

“You would not expect radical action on guns to go through the House of Representatives,” he continued, and if “radical action” is anything like what we now call “strict gun control,” he means… pretty much any action. But, at least we can try, maybe shame some Republicans into…

“In fact, I’m not even sure I’d expect it to be proposed by this administration.”

It wasn’t all bad news, though. Klein expects there will be “movement” on things like extended magazines, universal background checks, and  maybe the expired, porous assault weapons ban, but said “tightening that up” to include more weapons would be “a very large lift.”

Klein concluded by saying that we can dick around some more with executive action (again, I’m paraphrasing), but that’s pretty much it.

As depressing as that is, and as attractive as it is not to believe it, Klein is probably right. You can’t pass a bran muffin through the House with prune juice these days, and even with the seemingly unprecedented energy around the issue of reducing gun violence, even with the overwhelming public support for most of the measures under consideration, that body has the cultural nervous system of a brontosaurus. By the time they feel the pitchforks, the moment will have passed. Given what it took to get us here, we must pray there is never another such moment. They didn’t care enough when one of their own colleagues was shot in the head, or when a 9 year-old girl was killed, or even when a Muslim terrorist came out in favor of lax gun regulations. If this doesn’t do it, nothing will.

To make matters worse, whatever does get passed as a result of this tragedy will poison any possibility of future action if it is not effective, and it will not be effective unless it includes all of the following:

Without a tough grandfather clause, any weapons ban is simply an invitation to stampede gun shows and Wal Marts before it goes into effect. Universal background checks and a national firearm registry won’t take the guns out of criminals’ hands now, but it will stop straw purchasers from funneling legally purchased guns into the hands of those criminals.

The good news, though, is that Ezra Klein is only right today, and he’s only right until he’s wrong. There’s still time to make them feel it.