Supporters And Opponents Of AZ Ethnic Studies Agree: The Other Side Is Racist 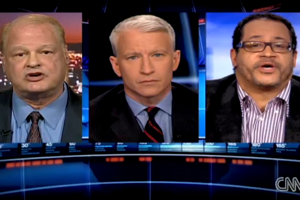 Arizona has doubled down on its racially-charged controversies this week with a new law opposing ethnic studies in public schools. Last night, CNN’s Anderson Cooper invited Tom Horne, Arizona Superintendent of Public Instruction (and Attorney General candidate) and sociology professor Michael Eric Dyson to debate the issue, and rather than come to a concensus on what’s best for students, both sides came to the conclusion that the other is racist.

Opponents of this new law in general call it another discriminatory policy from the people that institutionalized racial profiling, though Dyson kept to discussing the actual law at hand. Dyson argued that, because of a history of oppression directly related to certain ethnicities, a focus on that past in America is necessary so as to understand certain racial and ethnic attitudes that, without historical context, seem to have no foundation. In other words, banning ethnic studies perpetuates the kind of ignorance that leads to discrimination.

And in this corner, Horne argued that, while the ideal of every possible ethnic history being taught in schools is positive, the practical implications of ethnic studies programs are that minority children end up being segregated by race into classes where only the history of that race is taught. Rather than classify history by ethnicity, Horne argued, schools should abandon a “race-obsessed philosophy” and teach the same curriculum to students of all backgrounds. In other words, allowing ethnic studies perpetuates the kind of ignorance that leads to discrimination.

The most exemplary exchange in the debate for the general attitude of both sides comes late in the segment, when Dyson argues that “Martin Luther King [he comes up often in this clip] cannot by used to justify xenophobic and racist passions that are dressed up as desires to reform the curriculum.” Horne replies, “I think the xenophobia and racism is on your side.”