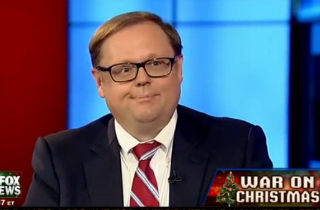 Mediaite readers may recall how an Alabama town faced controversy this week when it accidentally allowed a group of black drag queens to perform at its annual Christmas parade. Now, loyal readers, I ask you: If you had one guess as to which Fox News personality was outraged by this story, who would you pick?

Pretend you never saw the headline. Obviously the answer is Todd Starnes, he of perpetually outrageous outrage.

During a Monday evening Hannity segment with guest-host David Webb, Starnes ran through three “outrages” in that ongoing War on Christmas™, which predictably included the “Prancing Elites” strutting their stuff for a bunch of horrified residents.

As b-roll of the prancers played on-screen, Webb (confusingly) explained: “I’m a tolerance guy. If you have your belief, I’ll be tolerant of it. This doesn’t seem like tolerance to me.” Wait, what? So people agreeing to perform in a parade doesn’t seem like “tolerance”? Really bizarre, but probably sheds some light on where Webb draws the line on his so-called love of “tolerance.”

-RELATED: Finally! Todd Starnes Goes on a Fox Show That Doesn’t Let Him Get Away with Spewing Nonsense

Starnes, of course, piled on with his usual rhetorical panache: “It’s not every day in south Alabama that you have a bunch of grown men dressed in pantyhose and leotards prancing down main street.” He recounted how news reports noted the “snug white shorts” and “sharp thrusts” and “pristine makeup” sported by the team. Quelle horreur!

After rolling some tape of a mother declaring “outrage” that the parade didn’t notify parents that there’d be strange black men “gyrating their hips” (What is this? The 1950s’ anti-Elvis panic?) around in makeup, Starnes exclaimed: “Lord, sweet mercy! Have you ever been down to south Alabama? This is Duck Dynasty country. Unless those guys were sporting long beards and camo, this isn’t gonna fly.”

Yeah! None of those queer-baggers could ever pass muster down there.

Of course, everyone failed to mention that the inclusion of the troupe was likely an oversight or poor vetting; and not some “secularist” conspiracy to affront Christianity. Also no word on whether those same folks (or Starnes) are outraged by scantily-clad Rockettes-like female dancers prancing their way through parades every year; or by women who confuse gender norms and dress up to play football for powderpuff games.

At least we can all look back and smile about this other Starnes segment.