Surreal MSNBC Panel Featuring Nunberg, Page, Caputo and Corsi Gets Roasted: ‘Which One is Shemp?’

Surreal MSNBC Panel Featuring Nunberg, Page, Caputo and Corsi Gets Roasted: ‘Which One is Shemp?’ 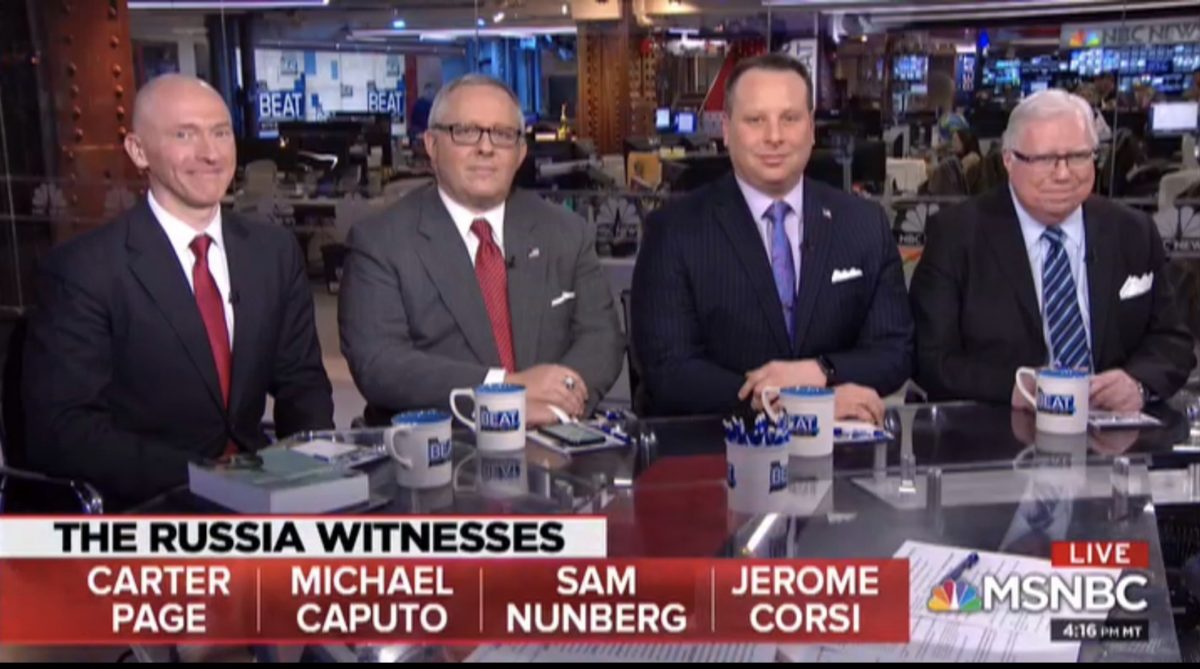 Afterward, The Beat sent out this concise sum of the segment.

Mueller witnesses on whether Michael Cohen should speak to Congress before going to jail:

"I don't have any opinion on it" – Jerome Corsi
"I think he should" – Sam Nunberg
"I really couldn't care less" – Michael Caputo
"The more openness the better" – Carter Page pic.twitter.com/MmchYot0Ei

Yet others on Twitter also had reactions — strong reactions — to the four of them together on the same panel on MSNBC.

Some expressed surprise, while Jonathan Swan of Axios praised the lineup as “One of the great cable news bookings of all time.”

Um, wow. @AriMelber has Page, Caputo, Nunberg and Corsi all at the same time. pic.twitter.com/jQK9y8fhm3

This episode of the real presidential aides of Donald Trump is freaking me out pic.twitter.com/0le3LWF3jM

One of the great cable news bookings of all time https://t.co/yPNtbiuiqG

Others had some jokes.

this is almost as good as when the original beach boys reunited to go on tour. pic.twitter.com/M6hkcmqvPH

The Four Horsemen of the Apocalypse

They’re having a lying competition and it’s a four-way tie.

Which one is Shemp???

This is your Sistine Chapel

And some even offered their own version of the panel.