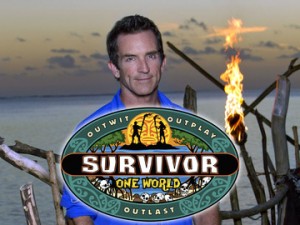 I can’t believe this is the second to last One World episode! How fast did this season go by? I must say, I have really grown to LOVE this cast – and not just due to the total girl power :)

This episode kicks off with the group returning to camp from tribal. Tarzan reveals that he apparently has a “sub-plot” to make it to the top 3. (I gotta hear this). Surprisingly, his plan is not half bad and Kim doesn’t think so either. He pitches his theory about keeping him, Alicia, and Christina because none of them pose a threat, whereas Chelsea is Kim‘s biggest threat. Kim obviously knows this, but will the bond of their friendship be enough to keep Chelsea in the game? We shall see…

It’s day 35 Kim is sitting pretty but also committed to two alliances. She’s the “fourth” with Tarzan, Alicia, and Christina, but also in with Sabrina and Chelsea. This is a good place to be, but also a dangerous place to be should anyone open their mouths. The reward challenge is pretty badass! Actually, not so much the challenge as the reward! That may be the best yet! The winner will enjoy a 3-course sunset meal on a yacht, a shower, fresh clothes, AND get to spend the night on the boat! Jealous! The challenge itself brought back terrible memories for me…I broke out in hives and cold sweats when I saw what it was. Ok, that’s dramatic, but seriously, I HATE puzzles and I remember spinning around and then falling like a loser. Oh yea, so hot. The castaways had to race to release three discs by spinning around and then use the discs as a decoder to line up three numbers and crack a code. It was a pretty tight race, but in the end, Chelsea was the winner! The hard part is, who will she choose? After promising Christina she would take her, she ends up picking Sabrina and Kim to join her. It should be pretty clear to the others what’s going on at this point…

And it is, because back at camp Alicia is pissed and rallying Christina and Tarzan to stick to their next vote of Chelsea. Tarzan believes that Kim is deceiving them … good Lord, he’s onto something! Haha. I still have a hard time believing that Alicia will actually go out on the limb and make a move on her own though. She seems pretty enamored with Kim.

Kim is so good. She immediately talks to Alicia who devulges Tarzan’s plan of convincing the jury to give her their votes. Oh wait…he made the same promise to Kim right? Kim could barely contain herself with the information and immediately ran with it, planting the idea that Tarzan is playing them both and plans to take Christina to the end. Just like that, 10 minutes after returning to the beach, Kim has totally regained control of Alicia…who refers to herself as “queen of the social game.” I’m sure she’s somewhere watching this episode with a red face, kind of embarrassed because CLEARLY that title belongs to Kim.

Wow – I’m having flashbacks throughout this entire episode! I was just telling someone about this challenge today! Each castaway has to hook fish-hooks and collect bags of puzzle pieces. Once the bags are collected they must untie them use the pieces, which mirror fish bones to complete the skeleton while one hand is tied behind their backs. I LOVED winning this challenge because it was so crucial for me…plus I won a pretty amazing food reward :) … It came down to Alicia and Kim – but in the end the diva herself (Alicia) captures immunity. Of course, the chirping begins around camp as to who should be voted out or basically, if Alicia is going to stick to Kim’s plan or not. Alicia, if you’re afraid of Tarzan and are looking at him as a “mastermind,” do you really think you’re that stellar of a player? I mean…I die. Chelsea is freaking out because she is clearly on the chopping block and the one who holds her future are a few thoroughly unstable people. I’d be freaking out too. On a side note, what in the world is Tarzan wearing? Oh no big thing, just Kat’s tank top and her underwear on his head. I mean, why is that weird? Ugh, I can’t deal.

First of all, Kat is GORG. Like, stunningly beautiful! At tribal, Tarzan poses a pretty good argument that he could be an asset to the women and should be kept until the end saying, “no one’s gonna want to vote for a millionaire.” Meanwhile, when Jeff makes a reference to Tarzan’s tank top (which belongs to Kat) she can barely keep the tears back. Chelsea keeps Alicia’s paranoia alive by suggesting that Tarzan could be playing people more than they know… and you can see the wheels begin to turn in Alicia’s head. Job well done ladies (Kim), because officially Tarzan is gone and IT’S ALL ABOUT THE WOMEN!!!!!!!!!!!

Players of the Game:

1. Kim – Isn’t it OBVIOUS?
2. Chelsea – Because you dominated that reward challenge and I still have nightmares about the spinning discs.
3. Kat – GORGEOUS!