Survivor: One World Recap: ‘I Am A Republican, I Am Not A Democrat, I Do Not Believe In Hand-Outs’

Survivor: 'I Am A Republican, I Am Not A Democrat, I Do Not Believe In Hand-Outs' 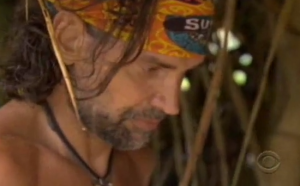 Episode 3 kicks off with the women returning to camp after tribal council, where Nina was voted out. Chelsea admits that “all eyes are on Kat right now,” and while she sits by the fire with Kim, the two of them chuckle and claim tribal to be “a joke.” The two girls definitely seem on the same page and unhappy with their alliance right now. I wouldn’t be surprised if they jumped ship at any given moment.

There’s an intense storm coming so Colton and Jonas invite the girls over to their camp if it gets to be unbearable. The women are determined to stick it out, and they do, but they look absolutely miserable. I literally broke out in hives when I watched that scene. I remember nights on Survivor that were some of the worst nights of my life. It was freezing. It was cold. When the rain came, the mosquitoes came with it – and at times, it literally felt like torture. We definitely take for granted the use of little things like umbrellas or being able to escape inside during a storm. I’ll be the first to say, I empathize with them because it is NOT easy. It’s really freaking hard, and the elements can get to you and break you down. On the other hand … win a dang challenge and you might be sitting pretty under the tarp right now! (Sorry, I’m not sorry)

Come morning, Chelsea reports that the Salani tribe got zero sleep, they have no fire, so therefore no food. Not good. As the two tribes walk into the reward challenge, it is absolutely pouring rain. Jeff reveals that the tribe members will face off one vs. one in a memory test. They will memorize a line-up of items and either competitor can drop the curtain when they feel they have the items down. The women get off to a great start with Sabrina, Monica and A-lee-seyah all winning the first three rounds. Troyzan and Kat face off in what might have been the longest memory game in history. The twangy country music playing in the background was classic. Well done production, well done. I guess 7th time’s a charm, because Kat finally defeats Troyzan to put the women up 4-0 in the competition. Christina is the last to go against Bill and….by a landslide, the women win!!! Besides taking away some confidence and dignity they also gain fishing gear, a canoe and paddles.

The tribes return to camp and the weather is still intense. The girls once again approach the men for help – this time requesting an ember from their fire. Of course, Matt is opposed to these “hand-outs” for nothing in return and surprisingly, Colton agrees too saying, “I’m a Republican not a Democrat…I do not believe in hand-outs” (One of his many classic lines of this episode) Have I mentioned I love him yet? I believe I have, but it needs to be said again. Colton, I LOVE YOU!

As Alicia is standing by the MEN’S fire, she is complaining that their deals aren’t fair? Because they want something in return? Really? I would have said ‘get out of our shelter’ about 5 seconds ago.

The sun is out the next day and it’s a new day for the women. They’re feeling confident and begin their morning by catching some fish. At the immunity challenge, one person from each tribe is designated as “the caller” in which they must guide their blind folded tribe mates through a series of obstacles until they reach a water tower. Once at the water tower, they must reach up and pull a lever releasing a bag of puzzle pieces. Once all five bags are collected, the caller must then solve a puzzle. The men establish that Bill will be the caller for their tribe, and for the women, Sabrina. (We had a similar challenge on my season, by the way. It’s important to have a great caller – and Rob was designated as ours. He did an amazing job and we ended up winning the challenge for immunity as well as a basket of donuts/pastries. I’ll never forget it :)

Once again the men appear to be dominating the competition and Bill gets a big head start on the puzzle. Just when you think all is lost for the women….Sabrina brings it home for a HUGE come-from-behind win!!!! I’m excited for them and it was awesome to see their pure, raw emotion at that moment.

Matt, displaying his usual charm, claims “I’ve spent eight days out here developing some power – and I’m ready to execute it. I’m gonna use it tonight.” Famous last words? We shall see…

Back at Manono, Colton is completely annoyed with Bill, mocking him and calling him “ghetto trash.” Yikes. He immediately begins campaigning to his alliance (Tarzan, Troyzan, Jonas, and Leif) to get rid of Bill. As they’re talking strategy, Jay crashes their party, learns of the plan and agrees to vote with the majority (smart decision). Matt then approaches the group – and it’s instantly awkward silence. Ahhhh, gotta love the moments when you know everyone is talking about you – yet they pretend they’re not. News flash, when you walk up on a conversation and it instantly gets quiet, they’re talking about Y-O-U. Just FYI.

Also, one more thing. Matt, can you please stop referring to your alliance as “the muscle?” … and now he’s talking about roosters and chickens? Who are you? He’s digging his own grave, and I’m sitting here yelling “KEEP DIGGING!”

“You Messed With The Wrong Queen”

At tribal council, Colton wastes no time in sharing that he has an idol…and that he intends to play it. Mike, Matt, and Bill attack him for spending time with the girls and being lazy around camp. Tarzan defends Colton and Matt, of course, tries to bully him around. Tonight was actually a very uneventful tribal, BUT we go into the vote not really having an idea of who’s going home. Colton delivers another amazing line during the vote when he says, “you messed with the wrong queen.” Like, really? I die.

When Jeff asks if anyone wants to use their idol, Colton stays seated. Good job, hold on to that sucker :)
With tears in my eyes (not) MATT is sent home!!! And he forces me to ask one question …. Who’s the chicken now? (Muahaha!)

Top 3 Players of the Week:

1. Sabrina – ROCKED the challenge and clinched a come-from-behind victory for the women! Amaze!
2. Colton – I need more of you! Can they do a one-hour special of just Colton-isms?
3. Matt – Thank you for your time on Survivor. I will remember you for the following: roosters and chickens and muscles and “average joes” …now, GOODBYE.

Thanks for tuning in y’all!! Remember to follow me on twitter at @AshleyUSurvivor. And watch a slip of Colton’s quip below, courtesy of CBS: