Survivor: One World Recap: ‘We Have A Black President!’
VIDEO

Survivor: One World Recap: ‘We Have A Black President!’ 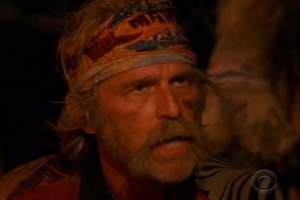 Episode 4 promised to be the most SHOCKING episode in Survivor history!!! Wait…aren’t they all? The producers always find a way to reel you in don’t they? :) Nonetheless, this episode was, in fact, filled with craziness and some wildly unexpected twists!

The men return from tribal and Mike is upset that Matt was sent home, obviously. He believes his tribe will be much weaker if they continue to get rid of “the muscle.” (I feel lame even typing that phrase). Troyzan and Tarzan agree that Bill should be the next to go because of ….his charm? Whatever you say guys…

Over at the women’s camp, they are mealing on snails and Monica says she could last 31 days on snails, coconuts, and rice. First of all, I’m jealous that they had snails and coconuts. On my season we had rice ONLY. Ok, I lied…we had termites and yes, I ate them. Once…ok, twice. But you would have to if you were starving – trust! Seriously though – we didn’t have bananas, coconuts, or anything that other tribes had on past Survivor seasons and yes, I’m bitter about it. Jonas offers to use the net, saying that because he’s from Hawaii, he knows exactly when and where to lay the net. Even though the men agree to give the women half of the fish they catch – Kim calls Jonas a “real rude dude” and dismisses the proposal.

The two tribes will have to take turns slinging coconuts at a giant wall of targets. The first tribe to knock down five targets in a row, either horizontal, up/down, or diagonal win reward. The reward was interesting because the winner was able to choose from three categories: comfort, protection, or luxury. Comfort consisted of pillows and blankets, protection was a tarp, and luxury included donuts, coffee, sugar, and all the fixings! On Redemption Island, we won pillows, blankets, two lounge chairs, and a tarp all at once…talk about a big win huh? The comfort items were SO key to make camp more tolerable. The very next challenge we actually won what was offered in their “luxury” package.” Let me tell you – those donuts were AMAZING. I remember how they tasted and my mouth still waters. On that note, the women could already use a donut or two! Nine days in and they are starting to look gaunt. Around this time on Ometepe, Rob was calling me “thin mint” and could fit both of his hands around my waist, fingers touching.

The men and women start out very even and quickly, the women have three connected targets to the men’s two. Kim connects on the 4th target, but Jonas keeps the men in it by knocking out another and making it 4-3. However, the women are rolling and win their 3rd straight challenge! Although I’m sure it was very tempting to choose the donuts – the women go with the tarp and I’m not surprised. It really was the smartest move, as a tarp is a necessity at camp.

Once they return to camp, the men are lounging around when Leif mistakenly divulges key information to Bill that Colton is gunning for him. Bill appears to be absolutely blindsided by this. Colton catches wind that Leif opened his mouth and is furious saying, “That little munchkin needs to go back to oz!” I literally spit out the cookie I was eating when he said this … Colton seriously kills me.

For the immunity challenge, the castaways are paired up and tied together. Each pair will race across a teeter-totter and solve a puzzle, untie a key and bring it back sending the next team off. Once they have collected three keys, one person will use a key to open all three locks, raising the team flag for the win. Chelsea and Alicia start off for the women and for the men, it’s Tarzan and Colton, who breeze through the first puzzle passing the torch onto Jay and Michael, who go and finish before Alicia and Chelsea have even completed the first puzzle. Before you can blink, Leif unlocks all three locks and the men blowout the women to win immunity! After the challenge, Alicia apparently thinks it’s comical that she had difficulty solving the puzzle. If someone on my tribe was laughing after we lost the challenge, I would punch them. Seriously, not smart. Sure enough, when the women return to camp, Sabrina immediately approaches Kim in hopes that they can come together and eliminate Alicia or, as she calls her, “dead weight with a mouth.” Ha! Couldn’t have said it better myself.

There’s drama at the men’s camp when Bill approaches Colton to talk, in which case “the queen” refuses, claiming, “you’re going home next, so it really doesn’t matter.” What ensues blows my mind. For once, all the hype proved to be right! This IS a first for Survivor. Thanks to Colton’s brilliant (not brilliant at all) move, the men vote to VOLUNTARILY give up immunity to the women and head to tribal council. Wait…what?! Yes, that’s right – THEY GAVE UP IMMUNITY! Craziness, craziness! In case you missed this one-liner, allow me: “I am running this whole tribe right now, If you can’t see tha,t you are Helen Keller.” Can you guess who said it? I just want to write a blog that chronicles all of Colton’s one-liners. I’m pretty sure it would get the most hits… thoughts? I just can’t handle him!!!

So…as promised, the men head to tribal to knock out another vote. I don’t understand half of what went on there, to be honest. One thing I will say, I felt for Bill when he revealed how he has lived on his own since the age of 17 and is a struggling stand-up comedian trying to fulfill a dream. I applaud him for doing what he loves and for not giving up. Colton was a little harsh at tribal, I think…I didn’t know what to make of him. The thing I will say about this show is this…it brings people together under the most stressful circumstances and can bring out the worst in some people. The feelings and emotions that you feel there are real. You are surrounded by people you may never choose to be surrounded by normally, and somehow, you must try to make it work. Understandably, this can bring some drama to your living room. So…you’re welcome :)

Moving on to the vote … Bill is eventually sent home.

What did you guys think about tonight’s crazy episode? I would love to see what you thought about the men giving up immunity! Please share in the comments (or on Twitter) and join me here next week!!

Top 3 Players of the Week: It was difficult to come up with these tonight – so I’ve thrown in a few ‘honorable mentions’ :)

1. Colton – The fact that he convinced ALL of these men to give up immunity and risk being voted out should be applauded. He really does know how to get what he wants.
2. Jeff – Love his dimps!
3. Matt – Because I didn’t have to see his face on my television screen this week :)

And enjoy a clip of last night’s tribal council — including Tarzan’s “We have a black President!” appeal — below, via CBS: