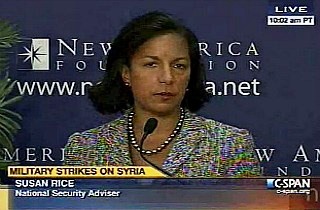 In August, 2012, President Barack Obama declared that the movement or use of chemical weapons in Syria represented a “red line” which would alter America’s response to that country’s civil war. In June, 2013, the White House confirmed that the “red line” had been crossed, prompting the president to pledge American support for the Syrian rebels. On Monday, in the wake of a massive chemical attack on civilians in Syria, National Security Advisor Susan Rice revealed that the White House confirmed the Syrian regime used chemical weapon as early as March.

Rice told The New America Foundation on Monday that the August 21 chemical attack on Syrian civilians prompted the White House to seek military action against that regime. However, she noted that this is not the first time Syrian President Bashar al-Assad has sanctioned the use of WMD in this conflict.

“We assessed that he has used them on a small scale multiple times since March,” Rice said.

She added that, while any chemical attack is lamentable, the August 21 attack merits a stronger response for the United States.

“Whereas previous attacks killed relatively few people, this one murdered well over 1000 in one fell swoop,” Rice added.

On Monday, a report in the Los Angeles Times reported that the administration had indications that chemical weapons were used in Syria in July, 2012 — before Obama had even drawn a so-called “red line” prohibiting the use of those weapons.