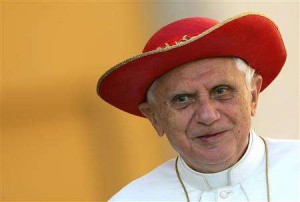 At the Hamptons International Film Festival over the weekend, Susan Sarandon was interviewed by actor Bob Balaban (trust us, you know him), hitting on topics ranging from Occupy Wall Street to the NYPD. But in an off-handed comment about giving a copy of the book, Dead Man Walking to the Pope, Sarandon quickly clarified that she meant the late John Paul II, not, “this Nazi we have now.” Newsday‘s Rafer Guzman reports that Balaban “gently tut-tutted,” but Sarandon repeated her remark.

On Fox News Tuesday, the Anti Defamation League’s Ken Jacobsen called the comments “unacceptable” and “inappropriate,” reasoning that it’s not just Catholics who should take offense to Sarandon’s remarks. “Our organization is not a Catholic organization, but we’re offended by this,” Jacobsen said. “It’s offensive to those who died in the Holocaust and it’s also offensive for those who care about having civil discussion in our current society.”

Pope Benedict XVI grew up in Germany and was forced as a child, along with every other 14 year-old, to enroll in the Hitler Youth. But he never joined the Nazi party and never attended any meetings. In fact, he abandoned the organization at the first chance. Catholic League President Bill Donohue released a statement on Tuesday denouncing Sarandon’s comments:

“Susan Sarandon’s ignorance is willful: those who have hatred in their veins are not interested in the truth.”

Donohue later, in an interview with E!’s Marianne Garvey and Sharareh Drury, ratcheted the language up a notch. “She’s a despicable person to make these kinds of despicable remarks,” he said. Donohue added the Catholic League won’t even ask Sarandon for an apology because, “she is ignorant and full of hatred to the Catholic Church.” He’s not alone in his sentiment. In a non-scientific poll on TMZ.com, 75% of the 100,000-plus people responding believed Sarandon to be ignorant.

Watch the report on Sarandon’s comments below, courtesy of FOX News: