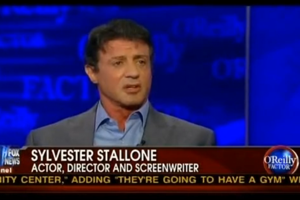 Sylvester Stallone has a brand-new film out about macho men blowing stuff up. Unfortunately, some film critics have interpreted The Expendables as a subliminal propaganda film to sell “apple pie patriotism,” and last night Stallone appeared on The O’Reilly Factor to dispel the rumors: No, his film has no complex hidden messages– it’s really just about blowing stuff up.

Many in the media world complain about August because most of the big newsmakers go on vacation, and the ones that don’t give us this. But the flip side to a slower news cycle is that many in the media get to explore issues or interests that they normally wouldn’t have time to in a more loaded news cycle. This is how you end up with stories like this comically slow car chase, or this topless alien protest, or, uh, yeah, guilty as charged. Last night, Bill O’Reilly indulged by talking to Stallone about action movies, and the result was one of the most fun and least combative cable news interviews in a while (for what it’s worth, it seems last night was “fun night” at The Factor, as he also did a segment on Justin Bieber).

O’Reilly interprets The Expendables as a film about “macho guys like you killing bad guys,” but notes that it has received some criticism for having a pro-America subtext. O’Reilly asks, “Do you have a secret agenda?” Stallone laughs and responds earnestly: “I wish I was that clever.” Instead, he defines the not-so-subtle message of the film as “you’re bad, you got to go” and, later, adds that “there’s nothing jingoistic… it’s just guys blowing stuff up and having a good time.”

Surprisingly, this is not the first time Stallone has come under fire for similar issues. He tells O’Reilly that, in particular, Rambo II received “the same kind of scrutiny” while having the same response.

O’Reilly’s chat with Stallone via Fox News below: