Syrian Opposition Spokesman on CNN: ‘There Are Some Bad Apples Among the Rebels’
video

Syrian Opposition Spokesman on CNN: ‘There Are Some Bad Apples Among the Rebels’ 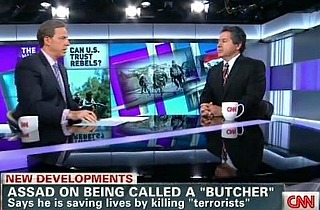 A Syrian opposition spokesman sat down with CNN anchor Jake Tapper on Monday where he was asked directly about reports that the rebel forces fighting Syrian President Bashar al-Assad are comprised primarily of Islamic extremists and Al Qaeda loyalists. He conceded that, while there are some “bad apples” fighting alongside the Syrian rebels, extremism does not characterize the entire opposition movement.

Tapper began by asking Syrian opposition spokesman Najib Ghadbian about Assad’s suggestion to CBS host Charlie Rose on Monday that his government’s effort to put down the Syrian rebellion is similar to a doctor amputating a gangrenous leg.

The CNN host added that rebel forces have been implicated in a number of brutal acts of violence themselves. “How do you answer – how do you assuage these concerns of the American people that some of the rebels seem to be quite bad guys?” Tapper asked.

“I would start by saying yes, there are some bad apples among the rebels,” Ghadbian conceded. “But the gangrene — subject of the gangrene — has been 120,000 Syrians killed by this regime, seven million displaced or made into refugees, 1.2 million houses destroyed by the Assad regime.”

“How many bad apples are we talking about?” Tapper asked.

“It’s a very small percentage,” Ghadbian replied. “The estimate by the Free Syrian Army: less than 6 percent. Of those fighters, 160,000 are extremists — extremists that espouse the kind of ideology that we don’t subscribe to.”

“They want an Islamic state which is something different vision from the coalition and the SMC,” he concluded.