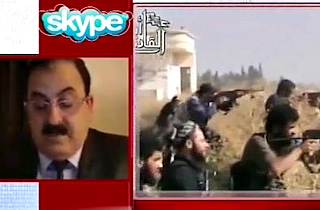 “All the people in the world now, even Bashar al-Assad, knows he’s killing people, that he is killing citizens,” Idris continued.

MacCallum asked about a picture published by the New York Times of rebels holding guns to captured Syrian army members. “It’s a very troubling picture for Americans, when they consider aiding the opposition,” she told him.

“This video and this picture is very old, it’s more than one year old,” Idris said. “It is before the building of our new command, and chief of staff, and Supreme Military Council, and we don’t have any responsibility for such [inaudible] who behave like that. It is very important now to say to our American friends that there are a lot of groups in Syria, [inaudible], who will do something illegal and promote videos and send it to an international media center to make the liberation army look very bad.”

Idris defected in 2012 and was appointed Chief of Staff of the Free Syrian Army’s Supreme Military Council in December. He said he was “very thankful” for Obama’s decision to intervene into the Syrian conflict, and pledged that any weapons received would go to the “right hands”—defected Syrian officers and Syrian citizens—and not radical Islamic groups.

Fox lost connection with Idris midway through the interview, but later regained it. Watch the videos below, via Fox News: