Syrian Rebel Leader: Kerry Assured Me Strikes Were ‘Still on the Table’ If Russian Deal Fails 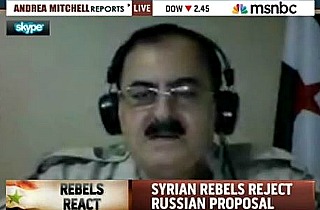 On Thursday, just minutes before the start of a joint press conference featuring Secretary of State John Kerry and Russian Foreign Minister Sergei Lavrov, the supreme commander of the Free Syrian Army, Brigadier General Salim Idris, told MSNBC’s Andrea Mitchell that the American government has assured him that military strikes remain a viable option for dealing with the crisis in Syria.

Mitchell reported that Idris spoke with Kerry directly just prior to the press conference. “He told me if they come to the conclusion they are wasting time, the threat of strikes is still on the table,” Idris said. “That will be an opportunity, if they are lying, to do the strikes against the regime in Damascus.”

Mitchell asked if Idris was concerned military strikes will not occur even if the Russian proposal falls through, given the strong public opposition in the United Strikes to the military option.

Idris replied that it was clear, based on evidence, that the Assad regime used chemical weapons.

“At the end of the day, Russians are trying now to find a solution for criminal regime in Damascus,” he said. “We think that the Syrian regime and Russian administrations are just playing a game and deciding to win time to delay the strikes.”

He said that he and his army are preparing themselves for new offensives from Bashar al-Assad’s regime.