Ta-Nehisi Coates: African Americans Have ‘Right to Be Skeptical’ of Lectures about Nonviolence 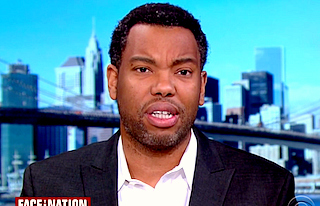 This humble scribe was just wondering this morning why Ta-Nehisi Coates is not on more of them television panels, especially discussing issues such as Ferguson. And then hey! There he was on Face the Nation.

Guest host Norah O’Donnell asked Coates about an Atlantic post he wrote this week in which he argued, “Taken together, property damage and looting have been the most effective tools of social progress for white people in America.”

“That’s just American history,” Coates explained. “People have this idea that the American Revolution — like the tea party was an actual party, that it was somehow nonviolent. The roots of this country are very, very violent. Enslavement, which is at the root of this country…that’s at the basis of who we are. The theft of the land from Native Americans, that’s at the basis of who we are. So when talk about all the things that we love about America — democracy, freedom — I don’t think that we should lose sight of the foundation on which those things were built. They were not built nonviolently.”

“That is not to say that looting is right, that looting is correct,” he added. “But when the government, which often acts violently towards African Americans, then turns around and lectures black people about nonviolence, we have right to be skeptical of that.”