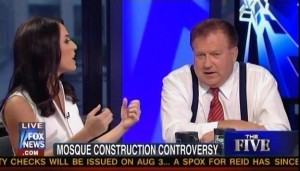 A few days ago, during an editorial meeting in the official Mediaite Jacuzzi (which is totally a real thing), we were wondering what this year’s “Ground Zero Mosque” would be. You know– the story about nothing (and not even in a fun Seinfeld way) that’s repeated ad nauseam for a couple of months so that the 24-hour cable news outlets can make it through the summer doldrums. After all, unless Casey Anthony happens to murder anyone on the way home from prison, we’re going to need a new story. Already, if today’s The Five is any indication, we may have a winner! And this year’s “Ground Zero Mosque” is…the “Ground Zero Mosque!”

Hooray, congrats, and please wake me up in September.

So what did we learn during our trip down Outrage Memory Lane today? That everyone totally thinks the Cordoba House people can build their mosque, it’s just really mean for them to do so (“jerky” in Greg Gutfeld’s opinion). That, according to Eric Bolling, there is “no question” that this is meant to be “a victory mosque.” That Andrea Tantaros thinks the Cordoba House (“or whatever it’s called”) people are “literally ripping open the hearts of 9/11 families” (“literally”? Ouch!). That, if you interview enough construction workers on the street about the project, it only takes three before you find one who will give an angry enough quote. And that Bob Beckel and Bolling arguing over pictures of rooftops isn’t 100% riveting television.

Speaking of rooftops, did you know that the one on the proposed project looks like an upside-down flag?! It totally apparently does!

Even Gutfeld reminding us all of one of the only entertaining things to come out of last year’s debate (his genuinely clever suggestion to build a gay bar next door) didn’t make this any less painful. It didn’t help when, in the next segment, he began mocking the Austrian man (no mention that he’s Austrian and not American) who made a similar satirical gesture about the treatment of religion.

Man, can’t you tell how glad I am we’re all talking about this again?

On another note, on Monday, I gave the first episode of this show an enthusiastic review and I still think there’s a lot of good here. That being said, at the time I mentioned that the four vs. one make-up of the panel wasn’t a problem because Beckel seemed to be having so much fun duking it out and defending his “wacky” liberal views. I’ve felt that way less and less throughout the week and particularly today. Beckel just didn’t seem to be enjoying himself in this segment and especially the next one in which he was absolutely berated for thinking Gov. Rick Perry shouldn’t be having a Christian fasting rally (by the way, no mention of the other concerns with the group organizing the rally). Maybe he was just tired but the less he fought back the worse it made his co-hosts look. To use Gutfeld’s word from earlier, unless Beckel’s giving as much as he’s taking, everyone just comes off as “jerky.”