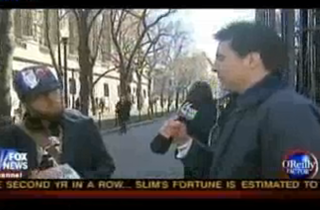 Fox News often objects to criticism of their coverage as overly excessively fear-inducing towards certain groups of people. But then there are segments like this: Fox News “man on the street” interviewer Jesse Watters hit the pavement around Columbia University for The O’Reilly Factor to ask those rascally college kids about their views on Islam. Unsurprisingly, the montage paints a picture of America’s brightest youth as naive, sheltered, and dangerously liberal.

Complete with x-treme graphics and an even more x-treme Linkin Park soundtrack (because that’s what the young folks listen to these days…in 2011), the “Watters’ World” segment, as host Bill O’Reilly describes it, goes out to find a peanut gallery of young people on various issues of the day. Watters sticks to the general theme of Muslim extremism in this installment, asking college students whether they fear Muslim terrorists and what America should do to fight the threat. While some interviewed give strong answers to Watters’ questions on why there seem to be so many Muslim extremists and what needs to be done to fix the situation, for every bright answer there was a blonde lady saying “we must fight terrorism with love,” or a hipster wearing an “ironic beanie” saying that Fox News “is just as nutty as the Muslim extremists.” Watters doesn’t give away his secret but, somehow, he managed to find the only students on Columbia’s campus that could double for UC Berkeley kids. In 1972.

The segment concludes with O’Reilly thanking Watters and telling him to “stay out of trouble” with the air of a caring-but-tough uncle. The resulting image of American Ivy League youth is clear– they’re all overeducated and underworked slobs downing sandwiches on street corners while hating on Fox News and glorifying Muslim extremism.

The impression an out-of-touch older person would get from this report is that young people have not changed one bit in neither style nor substance since the Watergate years. And not only have they not changed, Ivy League types in particular are portrayed as being utterly disconnected from American reality. In fact, it’s hard to think of the caricature Watters presents as that of Americans at all. Perhaps the most egregious example of such a portrayal occurs when the aforementioned “ironic beanie” hipster quips, upon being told he doesn’t understand Fox News, “yes, me and my many graduate degrees cannot comprehend Fox News.” This prompts a Harvard joke– an institution, of course, O’Reilly boasts a degree from. If the intent was to sharpen the lines between “the folks,” as O’Reilly loves to dub them, and the leftist extremist youth at American colleges, joking about his alma mater undermines that point. Furthermore, by giving away that he has “many graduate degrees,” the individual in question also gives away that he’s probably not very young, which eliminates the entire purpose of the segment.

And this sort of reporting is par for the course where Watters is concerned, presented as something of a hipper version of Griff Jenkins or a more law-abiding James O’Keefe. He doesn’t prank or cause mischief but he is the youth wing of the Factor and as such carries himself with an air of levity, and he always seems to run into the same sort of textbook liberals wherever he goes.

For example, Factor regular Bernie Goldberg said of Watters recently, after refusing to acknowledge him as a journalist, that “he’s going to come back with certain kinds of information because he knows what the boss likes”– talking about a previous package he had produced where seemingly no one at a union protest could think of an example of an instance in which Fox News has lied about a news story. Goldberg’s contention was that anyone that didn’t fit a certain “look” probably didn’t make it into the package, even if they could answer Watters’ questions correctly. There’s certainly no indication that people were deliberately cut from segments, as Goldberg contends, in the Columbia package. In fact, several answers from the people on the street sharply and intelligently refuted Watters, but those were greatly overshadowed by messier responses from walking liberal stereotypes.

If the segment’s intent was to scare older folk into thinking the ’60s are about to happen all over again, they’d better hope their older viewers don’t live within at least ten miles of a school of any kind. If Watters and company were going for accuracy on what actual people on college campuses look and sound like, and what they believe, they’ve completely missed the mark.