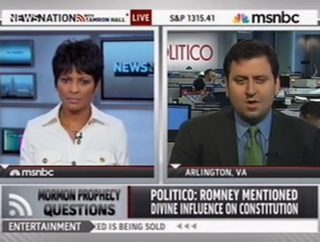 While it’s no secret that Mitt Romney is a member of the Church of Latter-Day Saints, the fact that he is now officially past the number of delegates required to be the Republican nominee for president means that his faith has once again come under scrutiny, and that his silence on the matter has led many to wild speculation on what the faith actually believes. On her program this afternoon, Tamron Hall interviewed Politico‘s Edward-Isaac Dovere, who had been attempting to contact the Romney campaign and the LDS church for more info on debunked prophecies once again in the headlines.

“Because he hasn’t talked much about his faith, people have gone online,” Hall notes of Romney, and they have found things like the “White Horse” prophecy, which have concerned many. Dovere explained that the Church does not officially endorse that line of thinking, that they have repudiated it and found it untrustworthy, as it came from someone who said he was near Joseph Smith when he said it but waited decades to reveal it. “What it predicts is that there would be a time when the Constitution is hanging by a thread and at that point a wealthy Mormon would rise up and raise the Republican,” explained Dovere of the White Horse prophecy, which concludes with “and Armageddon-style war against Russia.”

The other concerning belief the LDS Church is associated with, Dovere noted, was that “the framers of the Constitution were divinely inspired,” though he received comment from the Church itself that many of these prophecies were not part of official Church doctrine. He noted that the Romney campaign did not get back to him though, and Hall noted that the silence was leading to much “misinformation.”