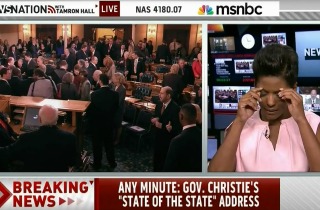 Preliminary opinion polling following the surge of stories and media reports relating to the allegedly politically-motivated closure of two lanes of the George Washington Bridge by New Jersey Gov. Chris Christie’s aides has found that the governor’s job approval rating has not taken much of a hit. Further, early surveys suggest that Republicans are starting to see Christie as a sympathetic figure while the press is perceived by conservatives as piling on to the potential 2016 presidential candidate.

Hall began by saying that “conservatives might be rallying around” Christie due to the perception that “Democrats might be dancing on his political grave.”

Radio host Michael Smerconish noted that Christie has lost some support with Democrats and independents, but is viewed slightly more favorably among Republicans as a result of this scandal. “I think the only perception among that group, they don’t like the way the media is treating Chris Christie and therefore, they view him sympathetic sympathetically,” he said.

Hall appeared vexed by the introduction of the media into the conversation. She asked if Republicans were reacting more to Democrats than the media’s coverage of the scandal involving the bridge’s lane closures.

“I think they don’t particularly like Chris Christie and whatever is meant by the mainstream media,” Smerconish replied. “Consequently, given a choice, they’re going with Christie and not you, Tamron.”

“I’ve got 3,000 things to say to that, but none of them will keep me employed,” Hall concluded.