Tapper Goes After GOP Rep. Who Accused Him of ‘Buying Into White House’ Spin
video

Tapper Goes After GOP Rep. Who Accused Him of ‘Buying Into White House’ Spin 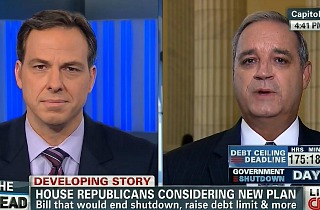 Rep. Jeff Miller (R-FL), chairman of the House Committee on Veterans’ Affairs, appeared on CNN’s The Lead with Jake Tapper on Wednesday where a tense exchange broke out over which party in Washington was to blame for the government shutdown. The CNN host took exception when Miller accused Tapper of “buying into what the white house has been trying to say all along.”

“Responsible members of the House Republican leadership opposed doing this, because they knew it would lead to a government shutdown,” Tapper said of the effort reform the Affordable Care Act via the budget process. “Why would you go along with this knowing that it would hurt veterans and their families this way?”

Miller replied by saying that most of the VA is “forward funded,” but he regrets that a shutdown occurred.

RELATED: Maddow Staffers Act Out Moby Dick On-Screen to Make a Point About Republicans or Something

“Certainly an opportunity to start a negotiation or a discussion with the president and Senator Reid over in the Senate I think was very important, but they don’t want to negotiate so they decided that they would see government shut down,” Miller said.

Tapper countered by insisting that the shutdown was entirely avoidable. “We negotiate all the time, and for you to perpetuate the rumor that it’s not negotiable, you’re buying into what the White House has been trying to say all along,” Miller countered.

“Sorry, did I miss some wonderful negotiation that’s gone in the last week in which there’s been some sort of achievement in defunding Obamacare?” Tapper shot back.